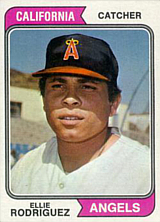 Former catcher Ellie Rodriguez was the first player from the Kansas City Royals to be named to the All-Star team, as he was the team's sole representative at the Midsummer Classic in their inaugural season in 1969. He hit just .236 and was named to the team for his strong defense. He earned the honor again in 1972, this time as a member of the Milwaukee Brewers. He did not get to play in either game.

During the 1970s, Ellie had the distinction of being one of the few Puerto Ricans who became a big league catcher. He also played for the Caguas Creoles, San Juan Senators and Bayamón Cowboys of the Puerto Rican Winter Baseball League.

His 67 assists in 1971 were tied for 2nd with Thurman Munson among AL backstops.

Since his playing days, he has served as a player development consultant with the independent Atlantic League. In 2018, he was announced the manager for their Road Warriors franchise, following the folding of the Bridgeport Bluefish.