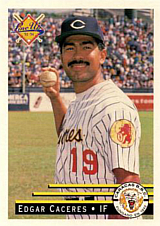 After his playing days, he was a coach for Caracas and also managed the Rojas in the Venezuelan rookie league. He was also a minor league technical coach. In the US, he coached for the Charlotte Rangers in 2000 and managed the GCL Reds from 2001-2003 with a record of 92-86. In 2004, he was manager of the Potomac Cannons. He became manager of the Potomac Nationals of the Carolina League in 2006, taking over after Randy Knorr became Washington's bullpen coach.