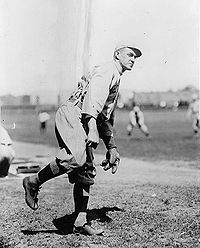 Buck O'Brien was a spitballer who had tremendous success for a few years. He is also remembered for being the object of the anger of Joe Wood and his brother Paul.

O'Brien went 20-13 in 1912 and started the first game the Red Sox played in Fenway Park; it was the year in which Joe Wood won 34 games. During the 1912 World Series, he went out drinking one night, not knowing that the manager would assign him to pitch the next game. Both Wood and his brother Paul got into altercations with O'Brien the next day, with many explanations given as to the reason.

O'Brien's career declined quickly, apparently because his spitball was no longer a mystery to hitters, and because, as one sportswriter said, O'Brien didn't stay in condition. He pitched only a couple more years in the minors.

After his playing days, he remained in the Boston area.