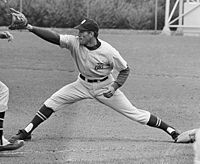 Boudewijn Maat was a Dutch baseball star of the 1960s and 1970s. His brother Robert Maat also was a member of the Dutch national team. Maat had gone to spring training with the Los Angeles Dodgers at one point in his career but he never played in the US minors.

This biographical article is missing the person's: weight
Retrieved from "https://www.baseball-reference.com/bpv/index.php?title=Boudewijn_Maat&oldid=1109069"
Categories: