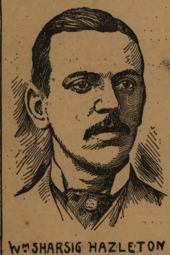 Bill Sharsig was the manager of the American Association's Philadelphia Athletics from 1886 to 1891. He had some degree of success, including a 81-52 record in 1888, good for third place in the league, and another third-place finish in 1889.

However, he is infamous among baseball researchers for his history of bringing in little-known amateur players to round out his teams for a game or two. His 1890 team is particularly notorious for featuring nine players of which almost nothing is known (and four more who were only positively identified over a century later by dogged SABR biographical researchers). The game of October 12, 1890 is Sharsig's crowning achievement in this regard. The game, the final of the season, was played in Gloucester, NJ against the Syracuse Stars. Sharsig recruited four local players for the occasion, John McBride, Bob Stafford, Ham Sweigert and John Sterling. All four made their only Major League appearance that day, and are otherwise completely unknown - even their first names have been called into question.