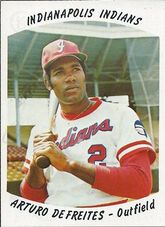 Arturo DeFreitas was up for 32 games over two seasons, mostly as a first baseman, at a time when Dan Driessen was the starter at that position for the Cincinnati Reds. The Reds won their division in 1979 when he received most of his playing time.

He was one of the discoverers of Vladimir Guerrero.