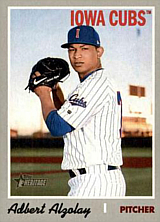 Adbert Alzolay was named to the roster of the National League team for the 2019 Futures Game, although by then he had made his major league debut with the Chicago Cubs, making his participation in the contest uncertain. However, he did make it in the game.