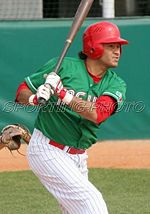 Oscar Robles hit .227/.227/.227 in the 2008 Caribbean Series for the Yaquis de Obregón. He got a game-winning hit against Oneli Perez, though, to give the Yaquis one of their two victories.

Robles holds the major league career record for most times being caught stealing without actually successfully swiping a bag. He tried to steal eight times and was caught every single time. All 8 attempts came in his rookie season, 2005, when he was a member of the Los Angeles Dodgers.

Robles was 4 for 13 with a walk, 2 homers, 4 runs and 3 RBI in the 2009 World Baseball Classic, splitting the shortstop role for Mexico with Augie Ojeda. Oscar got 3 of his hits in one game against South Africa, only hitting 1 for 7 in the other contests. His other hit was a big one, as it was a solo homer off Luis Miguel Rodríguez that gave Mexico a 2-1 lead against Cuba; Cuba would rally on the way to a 16-4 win, however.