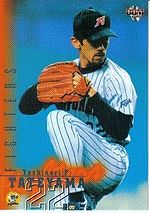 Yoshinori Tateyama pitched for 11 seasons for the Nippon Ham Fighters then made his major league debut with the Texas Rangers in 2011.

In high school, Tateyama was his team's ace on a squad featuring Koji Uehara. He played for Matsushita Electric in the industrial leagues after college. The Nippon Ham Fighters took him in the second round of the 1998 draft. Debuting with the big club in 1999, he went 6-5 with a 2.89 ERA. Had he qualified, he would have ranked 5th in the Pacific League in ERA.

Yoshinori went 3-3 with a 3.06 ERA in 2006. When the Fighters won their first Japan Series in 2006, Tateyama appeared in one outing, game four. He entered in the 6th, replacing Brad Thomas with a 3-0 lead, two on and one out. He retired Yoshinori Ueda then plunked Motonobu Tanishige. Kazuki Inoue hit a long drive to right that landed a foot foul, before Tateyama breathed a sigh of relief and struck him out. In the 7th, Tateyama walked Masahiro Araki and Hirokazu Ibata singled. Hideki Okajima relieved to face Kosuke Fukudome and Tyrone Woods, the Chunichi Dragons stars, and stopped the threat.

That off-season, Tateyama became a free agent. He signed with the Texas Rangers, who were looking for a veteran bullpen presence with youngsters Alexi Ogando and Neftali Feliz being considered as potential starting pitchers. He started the season in the minor leagues, pitching 14 games with the Round Rock Express of the Pacific Coast League with a 2.14 ERA and 26 strikeouts in 21 innings. Called up to the Rangers, he made his debut on May 24, 2011, giving up a run in two-thirds of an inning against the Chicago White Sox. In his third game, he pitched three scoreless innings in a 10-1 win over the the Kansas City Royals, picking up his first (and only) career save. He went 2-0, 4.50 in 39 appearances that season, and also pitched two-thirds of an inning in the ALCS against the Detroit Tigers, giving up a hit but no runs. He returned to Texas in 2012 but made only 14 appearances, going 1-0 with an ERA of 9.00. That was all for his major league career.