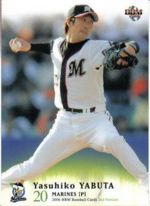 Yasuhiko Yabuta was a reliever in Japan and the major leagues. He played for the Kansas City Royals.

A free agent after 2007, Yabuta drew some interest from MLB teams. He signed for two years and about $5 million with the Kansas City Royals. On March 28, 2008, near the end of spring training, he was hit by a line drive off his leg, suffering a contusion but not serious injury.

Yabuta made his MLB debut in a 6-4 loss to the Twins. He replaced Ron Mahay in the bottom of the 8th and pitched one scoreless inning. He retired Justin Morneau on a grounder and gave up a Delmon Young single. Jason Kubel then grounded into an inning-ending double play.