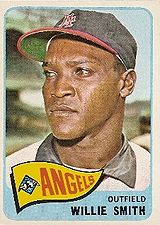 Willie Smith was one of the last players to reach the big leagues as a pitcher-outfielder. Smith showed flashes of brilliance both on the mound and at the plate during several seasons in the Detroit Tigers' farm system. After briefly reaching the big leagues as a pitcher with the Tigers in 1963, Smith was traded to the Los Angeles Angels. 1964 was an interesting season as Smith turned in a 1-4 record with a 2.84 ERA and batted .301 with 11 home runs in 359 at bats. He started out as a pitcher, but showed so much talent handling a bat that the team decided to turn him into a full-time hitter. By the end of the season, the light-hitting Angels had installed Smith as their everyday left fielder. He also played for the Cleveland Indians, Chicago Cubs, and Cincinnati Reds. Cubs fans recall his 10th-inning home run that won a wild 1969 Opening Day game, the first of many pulse-racing moments in that famed and fated season.

He had an excellent singing voice and performed the lead vocals on the "Pennant Fever" song recorded by the Cubs in 1971.

He died in 2006 in his home town of Anniston, Alabama, the victim of an apparent heart attack.