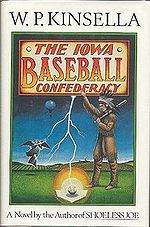 The Iowa Baseball Confederacy is a baseball-themed novel by W.P. Kinsella, first published in 1986. Although not as famous as one of Kinsella's other baseball novels, Shoeless Joe, which was turned into a successful Hollywood movie, it is considered one of the writer's major works and a prime example of the use of magical realism in North American literature.

On July 4, 1908, the Chicago Cubs, defending World Series champions, played an exhibition game against an All-Star team made up of players from the Iowa Baseball Confederacy, a semi-professional minor league based in that state. That epic game led to the destruction of the small town of Big Inning, Iowa, and the disappearance of the league, but it has been struck from the historical record. At least, that is the story that Matthew Clarke told his son Gideon, before his tragic death when struck by a foul ball while attending a game in Milwaukee, WI.

Matthew, who is from Onamata, Iowa, which was built on the site of the destroyed Big Inning, had made it his life's purpose to prove the existence of this game, even enrolling as a history major in college and writing a thesis on it (which is of course rejected by academia as fiction, since all sources that could support Matthew's story have been suppressed). Having passed on - or downloaded - his accumulated knowledge to his son Gideon, Matthew dies, but his son continues his quest, even though the events took place long before his birth, and possible eyewitnesses to the game have almost all died as well.

When the novel takes place, in 1978, Gideon manages to tell the story of the game, and in the process becomes a protagonist in it. It is a game of truly biblical proportion, going into endless extra innings that last for forty days, punctuated by continuous rain, leading to floods, deaths and landslides, and various transgressions of baseball's rules as the players play on. President Theodore Roosevelt even steps to the plate as a batter. One of the sub-narratives is that the game serves as a means for the local Black Hawk Indian nation to regain its traditional territory, and its chief, Drift Away, intervenes with all of his shamanic powers to influence its outcome. Meanwhile, by continuing to play for forty days on end, the Cubs lose ground in the National League standings, presaging the supposed curse that made 1907 the Cubs' last championship season for over a century. Of course the epic nature of the ball game makes it impossible for outsiders to accept it at face value, and it drifts straight into legend.