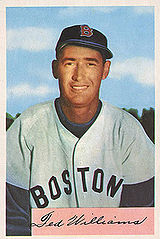 Inducted into Hall of Fame in 1966

"One of my best friends on earth and the greatest hitter I ever faced. And I faced a lot of guys, including Lou Gehrig." - Bob Feller

"A man has to have goals . . and that was mine, to have people say 'There goes Ted Williams, the greatest hitter who ever lived.'" - Ted Williams

Born Teddy Samuel Williams, named after Theodore Roosevelt, Ted Williams became one of America's most beloved figures for his exploits on the field and off. Many sabermetricians consider him neck and neck with Babe Ruth to be considered the greatest hitter of them all.

As a boy, he and his brother Danny were generally alone much of the time as his mother, known as "Salvation May" worked long hours for the Salvation Army. He bided his time at the playgrounds in San Diego, CA honing his baseball skills. His mother was of Mexican background, a fact which was not public when Williams was playing (he only revealed it, in passing, in his autobiography which was published in 1970). This has led some to argue that Williams himself should be considered Latino, but his experience had nothing in commonn with that of players whose Latin heritage was in the open and subjected to various forms of discrimination.

After his 11th grade year at Herbert Hoover High School (San Diego), Williams played 42 games for the San Diego Padres of the Pacific Coast League. After graduating in 1937, he played the rest of the year for San Diego before signing with the Boston Red Sox.

The Red Sox assigned the 19-year-old to the Minneapolis Millers of the American Association. Williams won the Triple Crown of the AA in 1938. He led the league with a .366 average, 43 home runs, and 142 RBIs. He also scored 130 runs to lead the league. His .701 slugging percentage was 142 points ahead of the #2 player and his OBP was around .481, 53 points better than Roy Cullenbine. The lanky outfielder drew an AA-best 114 walks. A switch to a lighter bat that year improved his game drastically. He ran into conflict with manager Donie Bush at the start of the season, as the brash youngster considered he should have been sent straight to Boston, but by the end of the season he admitted that he had learned a lot from the old-timer. His Triple Crown was the first official one in AA history. His pass to Boston was stamped for 1939. He spent the next off-season in Minneapolis, enjoying the hunting and fishing in the area, and courting Doris Soule, the woman who would become his first wife.

Great things were expected from the San Diego Kid in Boston. He hit .327 with 31 home runs and 145 RBI. His RBI total set a rookie record that still stands; he also set an all-time rookie record with 107 walks. Had there been a Rookie of the Year Award, Williams would have won it hands down. In addition to his league lead in RBIs and total bases with 344, he also led the American League in fielding errors. He was known to take imaginary swings in the outfield while ostensibly fielding his position, something that did not help his concentration if a batted ball made it his way.

In 1940, Williams slumped to 23 home runs but he increased his average. During the season, he was booed by Red Sox fans who believed he was loafing in the outfield. He swore he would never tip his cap to Red Sox fans again. He made his first of 17 All-Star teams and led the league in on base percentage for the first time in 1940. 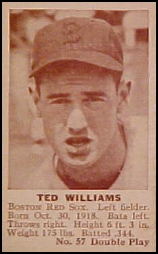 Williams may have shone brightest during the 1941 season. Sharing headlines with baseball's top star Joe DiMaggio, Williams was hitting .39955, which would round up to .400, on the last day of the season. Williams was offered a seat on the bench to protect the first .400 season since 1930 but Williams declined. He torched Philadelphia A's pitchers for six hits in eight at bats finishing the season at .406. No hitter has had a .400 batting average since. He also led the league in runs, home runs, walks, on base percentage, and slugging yet lost the MVP to DiMaggio, who had his riveting 56-game hitting streak that summer.

The hits kept on coming for Williams in 1942 when he won the Triple Crown. He had a .356 average, 36 home runs, and 137 RBIs. He lost the MVP to Joe Gordon, who played for the first-place New York Yankees.

From 1943 to 1945, Williams served as a Marine Corps pilot during World War II. Using Bill James's favorite toy metric, it can be estimated that Williams lost 561 hits, 103 home runs, and 382 RBIs during his first stint in the service.

Williams returned with a vengeance in 196. He won the MVP as the Red Sox won their only AL pennant in his 19 seasons with the club. The Sox lost the World Series in seven games to the St. Louis Cardinals while Williams hit just .200 as the Cardinals used a defensive shift to contain him.

In 1947, Ted Williams won another Triple Crown, joining Rogers Hornsby as the only players to win two Triple Crowns. He also lost the MVP in a Triple Crown year to DiMaggio again, by a single point (202 to 201). One writer who hated Williams left him completely off his ballot, costing him the award.

Williams was having another fine season in 1950, when he fractured his elbow chasing a ball at the All-Star Game held at Wrigley Field. Williams played just 19 games after the injury. He hit only .317. He followed with a somewhat subpar season for him in 1951 (.318/30/126).

Williams was recalled for active duty with the Marines in April 1952. He was sent to Korea where he served as a fighter pilot with future astronaut and senator John Glenn. Williams played just 43 games in 1952 and 1953, as he was in the service.

Defying logic and his birth certificate, Williams had his best season since 1941 in 1957. Although he was 38 at season's end, Williams led the league with a .388 batting average. He also had 38 home runs. He followed up his 1957 campaign with his sixth batting title in 1958. Until Barry Bonds, he was the oldest player to win a batting title.

Williams announced that 1960 would be his final season as an active player. He went out with a bang. At 41, he hit .316 with 29 home runs and 72 RBIs. His 29 home runs were a record for players in their final season until 1986 when it was broken by Dave Kingman. His .451 on-base percentage and .645 slugging percentage in 1960 would each have easily led the league if Ted had had enough plate appearances to qualify.

In a memorable appearance at the Red Sox final home game of the 1960 season, Williams homered in his final at bat off Jack Fisher. Although the Red Sox had a final three-game series at Yankee Stadium, Williams did not appear. At the game, the fans beckoned to see their hero one more time. They chanted his name for a curtain call and a doff of the cap, but Williams would not oblige, recalling the jeers he had heard in 1940. Covering the game for The New Yorker, the author John Updike wrote: "Our noise for some seconds passed beyond excitement into a kind of immense open anguish, a wailing, a cry to be saved. But immortality is nontransferable. The papers said that the other players, and even the umpires on the field, begged him to come out and acknowledge us in some way, but he never had and did not now. Gods do not answer letters."

Williams retired to Florida. He would take annual fishing trips to Miramichi, New Brunswick to catch salmon. During this time, he married Delores Wettach, with whom he would have two children in addition to a daughter, Barbara, by his first wife.

The Washington Senators hired Williams to manage their team in 1969. In four seasons, three in Washington and one in Texas after the Senators relocated, Williams was 273-364. He did lead the Senators to their only winning record in the 1960s, in his first season, when the club went 86-76. In 1969, Dick Allen's brother Hank Allen was quoted as saying that the Senators had not been fair to black players in 1968, but under new ownership and new manager Ted Williams in 1969, things had turned around totally.

Williams wrote The Science of Hitting in 1970. He was a celebrated hitting guru. He would often comment in the media about players and their hitting styles.

After a major stroke in 1994, an aging Williams handed control of his name to his son John Henry Williams. Williams was an absent father to John Henry, who was born in 1968. After their reconciliation, John Henry took control of Williams, most notably his autograph signing habits and public appearances.

At the 1999 All-Star Game at Fenway Park, "the best damn hitter that ever lived" was given a final send-off from baseball. In a golf cart, wearing a cap bearing the website of one of John Henry's ventures, Williams was heard telling Mark McGwire what joy he brought him. Then Tony Gwynn, the reigning Mr. San Diego, helped the original Mr. San Diego to his feet, where the aging legend threw out the first pitch. After returning to his seat, Williams was surrounded by a generation of ballplayers who had seen him only play in black and white video, delaying the start of the game by a number of minutes.

In 2000, Williams was inducted into the National Game Fishing Hall of Fame. Additionally, it is believed he signed an agreement to be cryogenically preserved after his natural death, along with John Henry and his daughter by second wife (Delores Wettach), Claudia.

When Williams died of a heart attack on July 5, 2002, his body was shipped from Florida to Arizona where he was placed in a tank of liquid nitrogen. A 2003 Sports Illustrated said Williams' skull had been cracked in an error at the Alcor Life Extension Facility in Scottsdale. Less than two years later, John Henry would join Ted at Alcor, a victim of leukemia at age 34.

Williams opened a hitters museum in Hernando, Florida. He also had a tunnel under the Charles River named for him in Boston. The Ted Williams Parkway in California connects Poway to San Diego. His #9 has been retired by the Red Sox. He was only the second recipient of the SABR Hero of Baseball Award. Throughout his life he devoted a huge amount of time to support the Jimmy Fund in support of pediatric cancer care and research, and was greatly responsible for raising its profile.

President George H.W. Bush awarded Williams the Presidential Medal of Freedom for his 19 seasons with the Red Sox and the five seasons he missed due to War service. 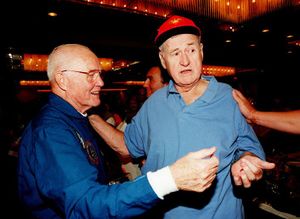 His first baseball card appearance was in the 1939 Playball set. On July 20, 2012, the United States Postal Service issued a commemorative stamp with his likeness as part of a series of four stamps honoring Hall of Famers.

"It was forty-five years ago, when achievements with a bat first brought him to the nation's notice, that Ted Williams began work on his defence. He wanted fame, and wanted it with a pure, hot eagerness that would have been embarrassing in a smaller man. But he could not stand celebrity. This is a bitch of a line to draw in America's dust" - Richard Ben Cramer (from Cramer's 1986 Esquire article about Williams)