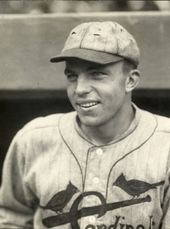 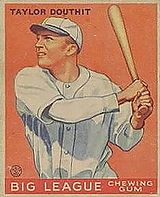 Was Taylor Douthit (pronounced DOW-Thit) the best defensive outfielder of all time? Although most people have never heard of him, Taylor Douthit had phenomenal range factors in the outfield. His 547 put-outs in center field for the St. Louis Cardinals in 1928 set a record.

Douthit, born in Little Rock, AR in 1901, attended the University of California and came up to the majors for his first cup of coffee with the St. Louis Cardinals in 1923. He was a regular outfielder with them from 1926 through the middle of 1931, when he was traded to the Cincinnati Reds.

When Douthit first came up, he played alongside Jim Bottomley and Rogers Hornsby. When Hornsby was traded for Frankie Frisch, he and Frisch were teammates for years.

The Cardinals went to the World Series in 1926, 1928, and 1930 when Douthit was with them. Douthit didn't hit particularly well in any of the Series, where he generally was the lead-off man.

He finished out his career in 1931-1933 with the Reds and Chicago Cubs. At age 32 in his last season, he was the same age as Cub teammate Gabby Hartnett, who went on to play through 1941.