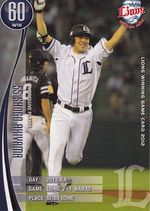 Shogo Akiyama was an outfielder in Nippon Pro Baseball, leading the league multiple times in hits and runs as well as leading in average, doubles and triples, before moving over to Major League Baseball.

Akiyama won three Best Nine honors in college and won batting and RBI titles there. The Seibu Lions took him in the third round of the 2010 draft. He made his NPB debut on April 12, 2011, as the #9 hitter and right fielder on Opening Day against Yu Darvish and the Nippon Ham Fighters. He went 0 for 2 with a walk and a hit-by-pitch. The next day, he got his first hit, a RBI single off Brian Wolfe. He hit .232/.285/.317 with 6 triples in 284 AB for his rookie year. He tied Shota Ishimine for fifth in the Pacific League in three-baggers. He got one vote for the 2011 Pacific League Rookie of the Year Award.

The Kanagawa native blossomed in 2015. He set a record for longest hitting streak in NPB by a left-handed batter at 31 games, two shy of Yoshihiko Takahashi's all-time record. He rapped a NPB-record 216 hits; his 215th, off Bryan Bullington, broke Matt Murton's mark. He also led PL outfielders with 341 putouts and 7 assists. He hit .359/.419/.522 with 108 runs, 36 doubles, 10 triples and 60 walks. He stole 17 bases but was caught 17 times. He made the leaderboards in outfield putouts (341, 1st), outfield assists (7, 1st), average (2nd, .004 behind Yuki Yanagita), runs (2nd, 2 behind Yanagita), hits (1st, 34 more than Yanagita), doubles (2nd, 2 behind Ikuhiro Kiyota), triples (1st, 1 ahead of Haruki Nishikawa), steals (tied for 6th with Esteban German), caught stealing (1st, 2 ahead of Ryoichi Adachi), OBP (2nd, .050 shy of Yanagita), slugging (5th, between Dae-ho Lee and Kiyota), OPS (2nd, 70 points behind Yanagita) and total bases (314, 2nd, 3 behind Yanagita). He was 2nd in voting for the 2015 Pacific League Most Valuable Player Award, well back of Yanagita. He joined Kiyota and Yanagita on the Best Nine in the PL and also as Gold Glove winners. In the 2015 NPB All-Star Game 1, he led off the for the PL. He grounded out and drew a walk against Tomoyuki Sugano, flew out against Shintaro Fujinami and grounded out against Tetsuya Yamaguchi. In Game 2, he struck out against Hiroki Kuroda and flew out facing Kenta Maeda before homering off Kenjiro Tanaka in a 8-3 loss to the Central League; Katsuya Kakunaka took over in left. He made the Japanese national team for the 2015 Premier 12. Leading off and playing center regularly, he hit .257/.333/.343 and scored five runs in eight games; he made one error after making only two all season long in NPB. He went deep off Esau Madrigal in the Bronze Medal Game rout of Mexico.

In 2016 NPB All-Star Game 1, he flew out against Sugano and drew a walk from Fujinami before being replaced by Itoi. In Game 2, he pinch-hit for Takero Okajima in the 5th and took over in center field. He grounded out against Shoichi Ino his first time up. In the 8th, he singled off Shinji Tajima and scored the tying run on a Shohei Ohtani single as the PL rallied for a 5-5 tie. In the 9th, he was set down by Yasuaki Yamasaki. His numbers were down from his record-setting season but still productive: .296/.385/.422, 32 2B, 98 R, 18 SB (6 CS), 77 BB. He was 7th in average (between Seiichi Uchikawa and Yang), 1st in runs (16 ahead of Yanagita), 3rd in hits (171, behind Kakunaka and Hideto Asamura), 2nd in doubles (8 behind Asamura), tied for 7th with 4 triples, 8th in steals, 4th in walks (between Takumi Kuriyama and Itoi), 7th in OBP (between Kuriyama and Ginji Akaminai), 10th in OBP (between Takahiro Okada and Nishikawa), 7th in total bases (244, between Sho Nakata and Kakunaka), 1st in outfield putouts (301), 1st in outfield assists (10) and 1st in fielding percentage (1.000). He did not make the Best Nine (Itoi, Nishikawa and Kakunaka did) but he did join Yang and Itoi as Gold Glove winners.

He was 3 for 10 with a run and two RBI in the 2017 World Baseball Classic, playing center when Nori Aoki was in right, while Aoki played center the other times. In 2017 NPB All-Star Game 1, he led off with a homer off Raúl Valdés, the 9th player to lead off a NPB All-Star Game with a dinger. He was retired by Kazuto Taguchi and Akitake Okada then singled off Marcos Mateo, stole second and came around with the winning run on an Uchikawa single. He was not named Game MVP, which went to Uchikawa. In Game 2, he again shone for the PL. He singled off Sugano in the 1st but was stranded then flew out against Takumi Akiyama. In the 5th, his two-out double off Ino scored Suzuki with the winning run. He added a single off Yasuhiro Ogawa to go 3-for-4 but again did not get the MVP; it went to Alfredo Despaigne.

For 2017, he hit .322/.398/.536 with 38 doubles, 5 triples, 25 home runs and 72 walks. He stole 16 bases in 21 tries, scored 106 times and drove in 89. He won the batting title (.012 ahead of Yanagita), led in runs (11 ahead of Yanagita), led in hits (18 more than Asamura), had the most doubles (four more than Asamura), tied for 6th in triples, was 9th in home runs, placed 5th in RBI (between Brandon Laird and Zelous Wheeler), was 6th in steals (between Shuta Tonosaki and Kenta Imamiya), was 3rd in walks (after Yanagita and Okada), was 2nd in OBP (.028 behind Yanagita), was 2nd in slugging (.053 shy of Yanagita), was 2nd in OPS (obviously to Yanagita) and led with 308 total bases (41 more than runner-up Wheeler). He joined Yanagita and Nishikawa on the Best Nine and the same two as Gold Glove winners. He was 6th in voting for the 2017 Pacific League Most Valuable Player Award, between Despaigne and Takahiro Norimoto.

Akiyama again left off the All-Star Series with a homer when he took Daisuke Matsuzaka yard to begin 2018 NPB All-Star Game 1. He flew out against Randy Messenger and grounded out facing Onelki Garcia before Tonosaki took over in center. In Game 2, he replaced Tonosaki in right and flew out against Taichi Ishiyama before singling in the 9th off Shota Nakazaki. He finished the 2018 season at .323/.403/.534 with 39 doubles, 8 triples, 24 homers, 107 runs, 82 RBI, 15 steals in 25 tries and 77 walks. His name was again all over the PL leader lists - 2nd in average (.029 behind Yanagita), 2nd in runs (8 behind Hotaka Yamakawa), 1st in hits (195, 20 more than Asamura), 1st in doubles (two ahead of Masataka Yoshida), 3rd in triples (after Seiji Uebayashi and Sosuke Genda), tied Nobuhiro Matsuda for 7th in RBI, 4th in caught stealing, 4th in walks (between Kensuke Kondo and Tomoya Mori), 3rd in OBP (after Yanagita and Kondo), 4th in slugging (between Yoshida and Asamura), 4th in OPS (between the same duo) and 1st with 332 total bases (3 more than Yamakawa). He missed the top 10 in homers by one. He joined Yanagita and Yoshida on the Best Nine and Yanagita and Nishikawa as Gold Glove winners. He was 3rd in voting for the 2018 Pacific League Most Valuable Player Award, behind Yamakawa and Asamura. He played in the 2018 Nichi-Bei Series, with a 3-run double in the opening win over the MLB All-Stars and 3 RBI in the game 2 win. His inside-the-park shot off Collin McHugh helped the NPB team win game 4. His 7 RBI led the Series, which NPB won; he was two ahead of MLB leaders Carlos Santana and Juan Soto. He was only the 2nd NPB player to lead a Nichi-Bei Series in RBI; Kazuo Matsui had done so 16 years prior.

He led off 2019 NPB All-Star Game 1 for the PL but this time did not go deep, instead posting an 0-for-4 day. In Game 2, he replaced Yoshida in left late and struck out against Kris Johnson in his only at-bat. For the 2019 season, he played every game for the fifth straight season, giving him 738 consecutive games played, not a record for a player surnamed Akiyama (Koji Akiyama had 833 from 1985-1991). He hit .303/.392/.471 with 31 doubles, 20 home runs, 78 walks and 112 runs. He was 5th in the PL in average (between Akaminai and Kondo), 1st in runs (26 ahead of Mori and Tonosaki), 1st in hits (11 more than Yoshida), 5th in doubles (between Kondo and Takeya Nakamura, tied for 10th in triples (4), 7th in walks (between Yoshida and Mori), 5th in OBP (between Nishikawa and Suzuki), 8th in OPS (between Despaigne and Tonosaki) and 3rd in total bases (278, between Yamakawa and Yoshida). He joined Takashi Ogino and Yoshida on the Best Nine and Nishikawa and Ogino in winning Gold Gloves, his 6th Gold Glove. He was 4th in voting for the 2019 Pacific League Most Valuable Player Award behind teammates Mori, Nakamura and Yamakawa from Seibu's prodigious offense. He was a late scratch from Japan's team for the 2019 Premier 12; Yoshihiro Maru took his place.

Akiyama became a free agent following the 2019 season, meaning he did not have to go through the posting system to negotiate with a team in Major League Baseball. There were reports that the Cincinnati Reds were interested in his services; ironically the Reds were the last team in MLB never to have had a Japanese player on its roster. The two sides confirmed that they had agreed on a three-year deal worth $21 million on January 6, 2020. Akiyama explained that the fact he had a chance be a pioneer on the Reds was a factor that had pleaded in the club's favor, in his view. Although he did not start the game, he made his big league debut in the Reds' long-delayed first game of the season, on July 24th, playing three innings in left field and going 1 for 2 with an RBI at the plate, in a 7-1 win over the Detroit Tigers.