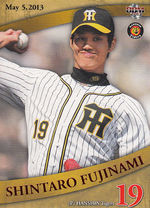 Shintaro Fujinami made his Nippon Pro Baseball debut in 2013.

Fujinami was 1-2 with a 5.40 ERA for Japan in the 2009 World Youth Championship. He helped Osaka Toin to be the sixth school to win the spring Koshien and summer Koshien in the same year when he was with them in 2012. He fanned 14 in a two-hitter of Kosei Gakuin High School in the summer finale. In the 2012 World Junior Championship, he was 2-2 with a 1.11 ERA, striking out 26 in 24 1/3 IP. He pitched 14 innings in two days then came back on the third day in relief against the US but lost thanks to bad defense, as he allowed five runs but only one earned in 1 1/3 IP. He led the event in innings pitched and strikeouts (4 ahead of Jen-Ho Tseng) and tied for second in wins (one behind Tseng). He was named the All-Star starting pitcher for the tournament.

Four teams picked Fujinami with the first pick of the 2012 draft (the Hanshin Tigers, Orix Buffaloes, Yakult Swallows and Chiba Lotte Marines); Hanshin won the rights. The scout was Shunji Hatayama. Only one team picked the other hot prospect, Shohei Otani, as there were fears he would sign with a team from Major League Baseball.

Fujinami started Hanshin's third game of 2013; no rookie had ever started before their team's fourth game (Toshiaki Moriyasu, Mikio Kudo, Daisuke Matsuzaka and Hideaki Wakui had all started the 4th games). He pitched well against the Swallows (6 IP, 3 H, 4 BB, 7 K, 2 R, 1 ER) before Kosuke Kato relieved; he lost, though, as Tomoya Yagi and two relievers combined on a shutout. His first strikeout in NPB on the mound came against Akinori Iwamura. He would be the fifth rookie out of high school to pick up his first pro victory the year after winning a Koshien Tournament. His first hit at the plate was versus Daisuke Miura. He completed the first successful squeeze bunt by a rookie pitcher out of high school since Shinichi Kondo in 1987. He became the third rookie out of high school to pitch in a NPB All-Star Game, following Tsuneo Horiuchi (1966) and Enatsu (1967). In 2013 NPB All-Star Game 1, he relieved Taichi Ishiyama in the 6th with a 2-1 CL lead. He allowed a hit to Yuya Hasegawa but Seiichi Uchikawa hit into a double play and Sho Nakata whiffed. In the 7th, he retired Yoshio Itoi and Toshiaki Imae, allowed a Tadahito Iguchi single then retired Keiji Obiki. Tetsuya Yamaguchi relieved him. The CL became the first team to use four rookie hurlers in a NPB All-Star Game; starter Tomoyuki Sugano, Imamiya and Yasuhiro Ogawa were the other rookies. In August, he won the monthly MVP award. He was the first Central League rookie out of high school to reach ten wins since Yutaka Enatsu in 1967 (Daisuke Matsuzaka and Masahiro Tanaka had done it in the Pacific League). He was the 7th rookie out of high school to fan 100 batters, the first since Tanaka six years prior. He finished the season 10-6 with a 2.75 ERA and 126 K in 137 2/3 IP. Had he qualified (he was a few innings shy), he would have been 4th in the CL in ERA (behind Kenta Maeda, Atsushi Nomi and Jason Standridge). He did tie Yudai Ono and Kan Otake for 10th in wins and was 9th in Ks (between Nomi and Standridge). He finished third in voting for the 2013 Central League Rookie of the Year Award behind Ogawa and Sugano; his 8 votes were well shy of Ogawa's 252.

His production fell off somewhat in 2014 (11-8, 3.53), though his K rate was up (172 in 163 IP). He hit his first career home run, off Aren Kuri. He started 2014 NPB All-Star Game 2, facing off with Otani; the only prior pair of pitchers 20 years or younger to start a NPB All-Star Game against each other had been in 1955 (Kazunori Nishimura and Motoji Takuwa). He gave up four runs in the first, on hits by Yuki Yanagita and Itoi (scoring Yanagita, who had stolen), a walk to Hasegawa and a three-run homer by Wily Mo Pena. He tossed a scoreless second, allowing another Yanagita single, but the damage had been done and he took the loss in a 12-6 defeat; he was relieved by Sugano. He did become the youngest Tiger to fan seven batters in a row, breaking a record Masaaki Koyama had set in 1956; the only younger NPB hurler to do so was Yukio Ozaki. He won a playoff game for Hanshin to become the youngest CL hurler (20 years, 6 months) with a postseason win (Katsuki Akagawa had held the record; he broke a 52-year-old franchise mark held by Minoru Murayama). Four Pacific Leaguers had been younger, with Kimiyasu Kudoh holding the record (19 years, 5 months). For the season, Fujinami just missed the top 10 in ERA (11th), tied Shoichi Ino and Maeda for 5th in wins, was second in whiffs (a distant 54 behind Randy Messenger) and tied Yasutomo Kubo for the most wild pitches (11). He started game 3 of the 2014 Japan Series with the Tigers even 1-1 with the Softbank Hawks. Fujinami allowed three runs in 5 2/3 IP; reliever Kazuya Takamiya had been on the hill when the third run scored. He lost to Kenji Otonari, who pitched seven shutout innings. Hanshin fell in five games. Following the season, he pitched for Samurai Japan against the MLB All-Stars in the 2014 Nichi-Bei Series. He was on the hill for the first NPB loss after winning games 1 through 3 to clinch the series, giving up a RBI double to Justin Morneau in the first and a three-run dinger to Morneau in the third.

In 2015 NPB All-Star Game 1, Fujinami was much better than he had been in the 2014 All-Star Game. Relieving Sugano with a 4-2 deficit, he retired all nine PL hitters he faced (Hideto Asamura, Katsuya Kakunaka, Kenta Imamiya, Motohiro Shima, Shogo Akiyama, Ikuhiro Kiyota, Tomoya Mori, Takeya Nakamura and Nakata) and left with a 7-4 lead, replaced by Hayato Takagi. He got the win in a 8-6 decision. He became the youngest pitcher to win a NPB All-Star Game MVP at 21 years and 3 months; Enatsu had held the record (22 years, 2 months) since 1970. He was the 16th pitcher in NPB All-Star annals with three perfect innings; Jiro Ueda (1970) and Enatsu (1971) had been the prior Tigers to perform the feat. He had a very good 2015 at 14-7, 2.40 with 221 K in 199 IP. He tied Kris Johnson for second in the CL in wins (one behind Maeda), was 5th in ERA (between Maeda and Ono), led in complete games (7, one more than Ono and Sugano), led in shutouts (4, one more than Ono), was 3rd in IP (after Ono and Maeda), led in walks (82, 15 more than Johnson) and led in whiffs (27 ahead of Messenger). He was 8th in voting for the 2015 Central League Most Valuable Player Award, between Miles Mikolas and Yoshi Tsutsugo. He was the only Hanshin player to get MVP votes that year.

Fujinami also did well in 2016 NPB All-Star Game 1. Replacing Sugano in the third with the game scoreless, he retired Asamura, Ginjiro Sumitani and Imamiya. In the fourth, he walked Akiyama then retired Kakunka, Yuki Yanagita and Nakata. As the CL scored in the top of the 4th and twice in the top of the 5th, he wound up with the win (saved by Shota Nakazaki), beating Tsuyoshi Wada. While his third straight All-Star team, he would not make it in the next several years. He fell to 7-11, 3.25 in 2016, fanning 176 in 169 innings but walking 70. He made leaderboards in ERA (9th, between Kenta Ishida and Ino), losses (tied Ino and Messenger for 3rd), innings (4th, between Johnson and Kazuto Taguchi), runs allowed (78, 2nd, 4 behind Ogawa), earned runs (61, 3rd, behind Ogawa and Messenger), walks (the most, 10 more than Messenger) and whiffs (3rd behind Sugano and Messenger).

Following the 2022 season, stories appeared to the effect that Fujinami wanted to play in Major League Baseball and had asked to be posted, something which was done on December 1st. It was unclear what interest there would be as he had spent parts of the past six seasons in the minors and had not been an All-Star since 2016.

His fastball has peaked at 98 mph.