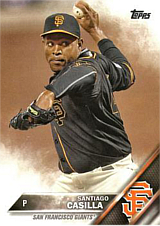 Santiago Casilla, was known as Jairo García, and allegedly born on March 7, 1983, when he was signed by scouts Bernardino Rosario and Raymond Abreu for the Oakland Athletics in January 2000. He made his pro debut with the DSL Athletics East that summer and came stateside with the AZL Athletics in 2001.

He made his big league debut in 2004, pitching seven times for Oakland in the next two seasons. Sometime before the start of the 2006 season, his ruse was blown up. Now going under his true name, Santiago Casilla, with a birth date of July 25, 1980, he hung around for thirteen more seasons spent entirely by the bay. A closer who racked up 38 and 31 save seasons towards the end of his career with the San Francisco Giants, the Casilla/García experience finished his career 42-31, 3.29 with 144 saves in 655 games. He entered the record books on May 17, 2015, when he became the 80th man to toss an immaculate inning, retiring Cincinnati Reds hitters Marlon Byrd, Brandon Phillips and Jay Bruce on three-pitch strikeouts in the 9th inning to save a 9-8 victory.

Casilla was one of the three-ring winners with the Giants World Series domination of even-numbered years in the first half of the 2010s. He was the winning pitcher in Game 4 of the 2012 tilt against the Detroit Tigers. He took over for Jeremy Affeldt with the score tied 3-3 and two outs in the bottom of the 9th, and promptly hit Omar Infante with a fastball, breaking his wrist. He stayed on to retire Gerald Laird and the Giants scored once in the top of the 10th. Sergio Romo pitched the bottom of the 10th, but Casilla was credited with the 4-3 win that completed a four-game sweep and gave the Giants a second World Championship in three years. Casilla was lights out in the postseason for his career, with a 0.92 ERA combined and 20 strikeouts in 19 2/3 innings, including a 0.00 ERA in 3 1/3 World Series innings. All of his postseason appearances were with the Giants.