"I never saw those old-timers, but he must have the greatest stuff of any pitcher in history." - Ray Culp, Phillies pitcher, 1964

A hometown boy born in Brooklyn, NY, Sandy Koufax had a relatively short but remarkable career that is generally considered to be one of the top ten ever by a pitcher. Beset by painful arthritis in his pitching arm, he retired after the 1966 season.

Koufax broke in with the Brooklyn Dodgers in 1955, at the age of 19. It was an auspicious time to break in, with the Dodgers winning the World Series in 1955 and again going to the Series in 1956. Although Koufax pitched well in his first cup of coffee in 1955, he did not appear in the World Series that year or the next. Under the "bonus baby" rule in effect at the time, the Dodgers were required to keep the lightly used young Koufax on the big club for two years rather than assign him to the minors.

The Dodgers of the time were a great team, with players such as Duke Snider, Gil Hodges, Don Newcombe, Pee Wee Reese, Carl Furillo, Roy Campanella, and Jackie Robinson. Among the other pitchers trying to make the Dodgers were Don Drysdale and Tommy Lasorda (who claimed that he and Koufax were the two players trying to be the #25 player on the 1955 team, and for some reason the Dodgers chose Koufax over him).

When the Dodgers moved to Los Angeles in 1958, Koufax spent four years pitching in the Los Angeles Memorial Coliseum, a park benefiting right-handed pull batters. He had previously pitched in a thoroughly hitter's park in Brooklyn. Critics had noticed that Koufax had relatively high ERAs for the time, but had not realized the extent to which his ERAs were affected by the home-field disadvantages. In fact, he pitched relatively well in those parks.

In 1959, he appeared twice in the World Series which the Dodgers won. He pitched nine innings, giving up only one run, but picking up a loss.

1961 was a big year for Sandy, as he won 18 games - his previous best had been 11 wins. He led the majors for the first time in strikeouts with 269 and finished seventh in the league in ERA. The famous story about his turnaround is that in spring training that year, catcher Norm Sherry (later a pitching coach) told him to ease up a bit on his fastball and simply look to throw the ball in the strike zone. The advice worked remarkably well; Koufax thought he was lobbing the ball at hitters, but in fact, by easing up a bit on his delivery, his velocity improved, and his control, which had been his Achilles Heel, suddenly became one of his greatest strengths.

In 1962, Koufax pitched even better until sidelined by a mid-season finger injury. He started 26 games compared to 41 by fellow work-horse Drysdale and 40 by steady Johnny Podres. The Dodgers finished the regular season with 101 wins and tied with the San Francisco Giants; the two teams were laden with All-Stars and future Hall of Famers. The Giants won the playoff series, 2 to 1, and Dodger fans lamented Koufax's late-season absence as pivotal to the team's demise. Out of action after just one inning on July 17th, Koufax returned on September 21st but was ineffective, totaling just 8 2/32 innings in four outings.

But 1962 began the great streak for which Koufax is so famous. From 1962 to 1966, he won the league ERA title each year. He led the league in victories in three of those years. He was named Cy Young Award winner three of those years - finishing third another year - and was named MVP in 1963 - and finishing second in the MVP voting two more times. In three of those years he won the "Triple Crown" for pitchers. It was quite possibly the greatest five-year stretch ever for a pitcher. While critics have sometimes noted that he got to pitch in a pitcher's park during a dead-ball era for those five years, they can't escape the fact that Koufax simply outpitched every top pitcher of the era in order to dominate the league - Juan Marichal, Jim Maloney, Gaylord Perry, Don Drysdale, Don Sutton, Bob Gibson, and others.

"I can see how he won twenty-five games. What I don't understand is how he lost five." - Yogi Berra talking about Sandy Koufax 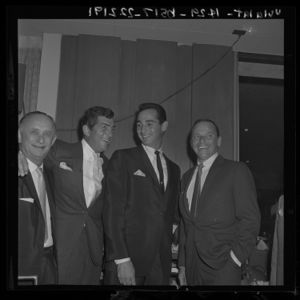 Koufax with Frank Sinatra, left, and Dean Martin in 1963

On September 9, 1965, Koufax threw a perfect game against Bob Hendley and the Chicago Cubs. The game, played in 103 minutes, was remarkable and set several records among them the fewest hits for both teams (1) and fewest baserunners (3). The Dodgers managed just an unearned run but Koufax was perfect for his fourth no-hitter.

The Dodgers of the mid-1960s featured pitching, speed, defense and light hitting. The last quality was so notorious that teammate Don Drysdale, while briefly away from the team, was informed of a Koufax no-hitter and famously asked, "Who won?"

Under ordinary circumstances, Koufax would have started the opening game of the 1965 World Series against the Minnesota Twins. However, that was the Jewish holy day of Yom Kippur. Koufax, like slugger Hank Greenberg of the Detroit Tigers in the 1934 series, sat out the game in observance. Drysdale lost the first game and then Koufax lost the second, putting the underdog Twins up 2-0. But Koufax came back to shut out the Twins with a four-hitter in Game 5 and then again, on two days' rest, with a three-hitter in Game 7. Lacking his legendary curve ball in the finale, Koufax consulted with worried catcher Johnny Roseboro on the mound early in the game. Roseboro asked what they should do, and Koufax replied, "Just blow them away." He struck out 10 that day. He was the first player to fan 10 in a winner-take-all postseason game; it would be 47 years before Justin Verlander became the second.

While his career was relatively short, the most similar player at age 30 (when Koufax retired) is Roger Clemens.

In addition to his wins and ERA, Koufax was famous for throwing 4 no-hitters (a record since broken by Nolan Ryan) as well as being the top strikeout artist of his time (he led the league four times and was second twice, as well as finishing in the top ten in 1957 when he wasn't even a full-time starter in Brooklyn). When he retired he was #1 all-time in stikeouts per nine innings, although he has since been passed by four more modern pitchers. His 382 strikeouts in 1965 are still the modern National League record, and just one fewer than Nolan Ryan's single-season record of 383, set in the American League in 1973.

Koufax hit two career home runs, both of which happened to be in Milwaukee, WI. Like Willie Mays, his first came off Warren Spahn. The second was against Denny Lemaster. Although a fine all-around athlete who briefly attended the University of Cincinnati on a basketball scholarship, Koufax was an atrocious hitter. This is attested to by a lifetime batting average of .097. As a hitter, he was a rarity: someone who threw left-handed but hit right-handed. He experimented with switch-hitting, but that didn't work either.

He and Drysdale had a celebrated "hold-out" before the 1966 season, when they both boycotted spring training in order to negotiate for more money. Koufax retired after the 1966 season. However, he continued to have a role with the Dodgers as a pitching instructor. A number of successful Dodger pitchers, including Orel Hershiser, credited Koufax as having a significant impact on their success. However, when Rupert Murdoch bought the team after the 1989 season, Koufax ruptured all ties with the Dodgers until they were bought by a consortium in 2012. He returned to his previous role of special advisor and spring training instructor in 2013. In the interval, he had filled a similar role with the New York Mets, whose owner, Fred Wilpon, had been a high school teammate of his and remained a close friend. Like Wilpon however, and possibly under his advice, Koufax invested a significant amount of money with Bernie Madoff and suffered large losses when his Ponzi scheme collapsed in 2009.

His first Baseball Card appearance was in the 1955 Topps set. He was elected to the Baseball Hall of Fame on January 19, 1972 by the Baseball Writers Association of America.

As a publicity stunt, the Modi’in Miracle drafted Koufax with the final pick of the first Israel Baseball League draft, in 2007.