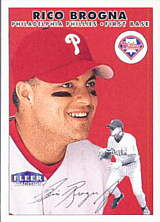 "I am hoping that I can inspire others to do things they didn't think they were capable of with AS. Learn to do what you didn't think possible, and you can accomplish great things." - Rico Brogna

Born in Massachusetts, first baseman Rico Brogna grew up in Watertown, CT, where he was an All-American quarterback on his high school football team as well as a baseball player.[1] He was selected by the Detroit Tigers in the 1st round (26th overall) of the 1988 amateur draft. In 1990, Rico led the Double A Eastern League with 31 home runs and tied with Greg Sparks with a league-leading 77 RBI. He was the league's All-Star first baseman. Brogna was diagnosed with ankylosing spondylitis (a disease that causes pain and discomfort in the joints) in 1991; he was a spokesman for the Spondylitis Association of America from the summer of 1997 to the winter of 2001. He still serves as an honorary board member for the Association. [2]

After a brief call up with Detroit in 1992, Rico had his rookie season with the New York Mets in 1994, during which he became only the third Mets rookie to ever have a five-hit game (on July 25), destroying pitching to a .351/.380/.626 line in 131 at bats. While he was unable to keep up that pace in a nine year career, he still had several fine seasons. His 104 RBI in 1998 was the first 100 RBI season by a Philadelphia Phillies first baseman since Bill White in 1966, over three decades earlier. The following season, he posted career highs in runs scored (90), home runs (24) and hits (172). Additionally, he was the first man to slug a home run at Coors Field, going deep for the Mets on April 26, 1995.

Brogna was head coach at Post University in 2006. In 2008, he was a scout for the Arizona Diamondbacks. He made his managerial debut in 2010 with the team's Double A affiliate, the Mobile BayBears. In 2012, Brogna was a scout for the Tampa Bay Rays. In 2015, he was appointed a coach with the Los Angeles Angels of Anaheim with his responsibilities listed as "player information coach". He had to take a leave of absence in May when he was diagnosed with testicular cancer; he underwent surgery and was able to return to work a month later. Brogna was a coach with the Reading Fightin Phils in 2018.

His wife's name is Melissa [3] and he has a daughter named Alexa Grace and a son named Hunter. [4]