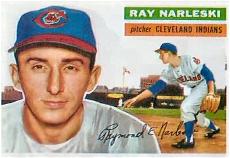 Ray Narleski was the right-hander in the dynamic duo along with southpaw Don Mossi for the 1954 pennant-winning Cleveland Indians. Narleski contributed 13 saves in 42 appearances. He worked in Games 3 and 4 of the 1954 World Series against the New York Giants, allowing one run in four innings. One of his best moments in the Series came in the 7th inning of the third contest when he struck out Dusty Rhodes, who up until that time had almost single-handedly beat Cleveland with his clutch pinch-hitting and was 4-for-4 plus a walk. The Cleveland team had just set an American League record with 111 wins during the season, but the red-hot Giants swept them 4 games to 0 to claim their first series since 1933.

Armed with a blazing fastball, Narleski continued to be outstanding in relief in 1955 going 9-1 while leading the American League in appearances with 60, also in victories out of the bullpen with 8 and with 19 saves. He had a great first half in 1956 with a 1.52 ERA in 32 games, but then had to pull out of the All-Star Game with an elbow injury. By 1957 he was moved into the starting rotation and finished the season at 11-5 along with 16 saves and an ERA of 3.09. In the All-Star Game he worked three-plus innings allowing just one hit in the 4-3 American League victory.

After baseball Narleski returned to his native New Jersey and worked as a body mechanic for H. A. DeHart Trucks before his retirement in Laurel Springs, NJ. The Narleski clan was a three-generation family in pro baseball. Ray's father, Bill Narleski, was an infielder with the Boston Red Sox in 1929 and 1930. Two of Ray's sons played in the minor leagues. One of the sons, Steve Narleski, a pitcher in the Cleveland Indians organization in the early 1980s, reached AAA but never got the call to the majors, preventing the Narleskis from becoming the first three-generation major league family.