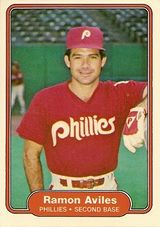 Infielder Ramón Avilés played parts of four seasons in the majors and later was a longtime minor league manager.

Originally signed by the Boston Red Sox, Avilés began his pro career in 1970 with the Greenville Red Sox. He made his big league debut with Boston in 1977, getting into just one game. Prior to the 1978 season, his contract was sold to the Philadelphia Phillies. He made it back to the majors in 1979 and saw his most action the next summer, backing up shortstop Larry Bowa and second baseman Manny Trillo. Following the 1981 season, he was dealt to the Texas Rangers for Dave Rajsich, and ended his playing days back in the Philadelphia chain in 1983. He also had a long and productive career at second base in the Puerto Rico Winter Baseball League, playing for the Arecibo Wolves, Ponce Lions, and Mayagüez Indians.

His nephew, infielder Mike Aviles, reached the majors in 2008. Ramón passed away at age 71 in 2020, from diabetes and elevated blood pressure.