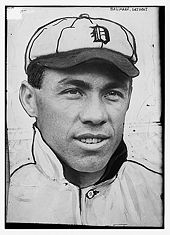 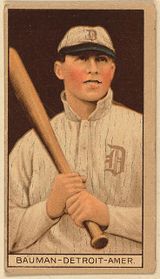 "Baumann does not get credit that he deserves. He always hits well above .260, and can play any position except pitch." - Pittsburgh Press, August 30, 1916

Charles "Paddy" Baumann played seven seasons in the American League. Mostly a second baseman, he also saw significant time at third base and the outfield.

Paddy, in spite of his nickname, was not named Patrick nor was he born in Ireland. Baumann was born in Indianapolis in 1885, two years before future teammate Donie Bush was born in the same place. Baumann had a very long minor league career, playing to age 42. He was player-manager for the Galveston Sand Crabs to begin the 1924 Texas League season, but was replaced by Tex Wisterzil. The team finished in 7th place with a record of 61-93.

"Paddy Baumann, just a lowly sub-infielder, utility batsman . . . drove in four runs, brought in two himself, and made a number of nifty stops around third base. . . J. Franklin Baker, whose shoes Baumann is filling at this time, is not much superior to the veteran first-aid man when the form of Baumann yesterday is taken into consideration by itself." - from the New York Times, May 26, 1916