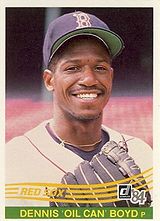 Oil Can Boyd was a highly visible ballplayer, partly due to his colorful nickname. He won 78 games in his career as a pitcher, and was on the 1986 Boston Red Sox team that played in the World Series. His nickname referred to the usage of the term "oil" as a slang term in Mississippi for beer. The word "oil" was sometimes pronounced "earl".

The son of Willie James Boyd, a performer in small black leagues of the Negro League era, and brother of minor league second baseman Don Boyd, Boyd was the 16th round draft pick of the Red Sox in the 1980 amateur draft. He began his career with the Elmira Pioneers and went 7-1 with a 2.48 ERA and was fourth in the New York-Penn League in ERA. In 1981, Oil Can went 14-8, 3.63 for the Winter Haven Red Sox, tying for third in the Florida State League in ERA. In 1982, Boyd went 14-8, 2.81 for the Bristol Red Sox, tying for fourth in the Eastern League in wins and finishing about as high in ERA. As a September call up to the Red Sox, he made his big league debut.

Boyd developed blood clots that ended his major league career. He did not play in 1992. The next year, he threatened to sue Boston for not inviting him to spring training. He returned to baseball with the 1993 Monterrey Industrials, losing all three of his decisions and had a 4.91 ERA. He did save 11 games in 14 relief appearances. Moving to the Yucatan Lions the next year, he went 2-0 with a 1.02 ERA in three starts. The rise of the independent leagues saved his career as it did for so many other veterans. He joined the Sioux City Explorers and went 4-1 with a 1.89 ERA before a blood clot in his right shoulder sidelined him. He set a Northern League record with 14 strikeouts in a game and pitched 10 shutout innings only to see his team lose in the 11th. He was also the first pitcher to face the Colorado Silver Bullets.

In 1995, the 35-year-old showman tried to break back into the big leagues as a replacement player for the Chicago White Sox and went 6-6 with a 5.09 ERA for Sioux City after the 1994 strike ended. Boyd went 10-0 with a 3.23 ERA for the 1996 Bangor Blue Ox, making the Northeast League All-Star team. 1997 was a 6-2, 3.71 turn for the Massachusetts Mad Dogs and 0-1 with a 3.00 ERA for the Greenville Bluesmen. Boyd came out of retirement as a 45-year-old in 2005 to pitch for the Brockton Rox of the Can-Am Association. In the preseason he faced fellow old-timer Rickey Henderson in a game. Overall, the popular pitcher went 4-5 with a 3.83 ERA as the staff's most-used hurler. That November, he was indicted by a federal grand jury in Mississippi for allegedly threatening a former girlfriend and her son.

In 2009, Boyd was expected to pitch for the Ottawa Rapidz, also of the Can-Am Association, but that gig failed to materialize. In 2012, he explained that he was prevented from having a more successful career by his frequent consumption of cocaine. He claimed that he had the drug in his system "two-thirds of the time" when he took the mound in the second half of his career. He said that he had started taking it around 1985 and that it would keep him up all night. He called it "a demonic drug" that he took "in response to a very cold, scary world I was living in as a young kid." The problem helped to put him on an early exit from the major league game, but he stated that racism also played a part, as white players such as Steve Howe received countless chances to redeem themselves, but not him. He made more controversial declarations while promoting his autobiography, due out later that year, accusing former teammate Wade Boggs of being a racist and using the "N word" every day - an accusation Boggs vehemently denied -, then adding in another radio interview that he was a regular smoker of marijuana and that he was in fact high at that very moment.