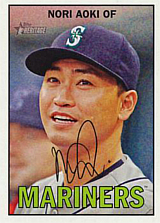 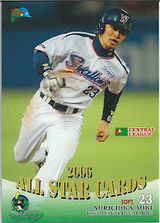 Aoki won the Tokyo Big Six University League batting title in the spring of 2002 and was a fourth-round pick of the Yakult Swallows the next year. In 2004, he led the minor Eastern League in batting average and OBP and saw limited time with Yakult, going 3 for 15 at the plate. Aoki became a regular with the Swallows in 2005 and had an amazing rookie campaign. He batted .344/.387/.417, became the second rookie to win a batting title, was third in the Central League with 29 steals, fourth with 100 runs scored and 7th in OBP. Aoki was a fairly two-dimensional player of speed and contact as he did not walk much or show real power. Additionally, he struck out 113 times, ruining the impression of a contact specialist. On the other hand, he broke the Central League record for hits (202, breaking Bobby Rose's record by 10) and became the second player in Nippon Pro Baseball history to have 200 hits in a season (Ichiro Suzuki had been the first). He shattered Ichiro's singles record of 151 with 166 such hits (Norihiro Akahoshi broke Ichiro's record earlier in the year but Aoki surpassed him by the end). He set a new NPB record with 61 multi-hit games, breaking the mark set by Shigenobu Shima of 60 a year earlier. For his work, Norichika won the Rookie of the Year award in the Central League and made the Best Nine. While it may be questionable if a free swinger can maintain high averages for a long time, Aoki's collegiate and minor league careers seemed to indicate it was certainly feasible in his case.

In his sophomore season, Aoki tied a CL record with 62 multi-hit games. He cut his strikeout total to 78 while drawing 68 walks in a vastly improved season on that front. He hit .321/.396/.439, showing a better offensive skill set, and hit 13 home runs. He stole 41 bases in 53 tries and scored 112 runs. He was third in the CL in average behind Kosuke Fukudome and Seung-Yeop Lee, second to Fukudome in runs, first with 192 hits (12 ahead of Andy Sheets, tied for fifth with 3 triples, tied for 5th in times hit by pitch (8), sixth in walks, led in stolen bases (6 ahead of Norihiro Akahoshi) and was third in OBP (behind Fukudome and Tyrone Woods). He got a huge raise after the year, almost doubling his salary from 72 million yen to 140 million yen, a team record for a fourth-year player.

Aoki reached 500 hits in his 373rd game in NPB, fastest in league history to that point by 13 games. He reached 500 hits in 30 fewer games than Ichiro Suzuki. He won his second batting title in 2007, edging out teammate Alex Ramirez, who broke Aoki's CL hits record. He was the first batting champ from a last-place team since Kenichi Yazawa in 1980. Aoki hit .346/.434/.508 and also was among the leaders in runs scored (114, first, 19 ahead of Michihiro Ogasawara), hits (193, 2nd), 4th in walks (80), OBP (first, 16 points ahead of Woods), steals (17, 7th) and 8th in slugging. Aoki's improving walk rate, improving power and decreased strikeout rate showed that his game was continuing to develop. He joined Ramirez and Yoshinobu Takahashi as the Best Nine outfield picks in the CL.

He was 3 for 13 with a walk and a double in the 2007 Asian Championship as Japan won and clinched a spot in the 2008 Olympics. In the Olympics, Norichika hit .294/.359/.412 with 7 RBI in 9 games as Japan's starting center fielder. His 3-run homer off of Brett Anderson in the Bronze Medal game gave Japan a 4-1 lead but their staff failed to hold on and Japan went home without a Medal. Aoki batted .347/.413/.529 in the 2008 season, continuing to improve his overall game. He scored 85 runs and stole 31 bases in 40 tries. He finished second to Seiichi Uchikawa in average in the CL, was 5th in runs scored, tied Alex Ochoa for 6th in doubles (29), tied for 4th in triples (5), nearly led in OBP (finishing second to Uchikawa by .003), finishing 6th in slugging and 4th in steals. The counting stats were especially impressive due to the time he missed due to the Olympics. He won a Gold Glove and made the Best Nine alongside Alex Ramirez and Tomoaki Kanemoto.

Aoki was Japan's main left fielder in the 2009 World Baseball Classic, with Kosuke Fukudome taking over in center. He hit .324/.381/.351 in 9 games and tied Shuichi Murata for the team lead with 7 RBI as Japan won the title. Norichika produced five runs in Japan's first win over runner-up South Korea. He was 4 for 5 and produced three runs in a 5-0 win over Cuba which eliminated them earlier than they had ever been knocked out of a major baseball tournament. Aoki made the All-Tournament outfield alongside Cubans Frederich Cepeda and Yoenis Céspedes, beating out players like Adam Dunn and Ichiro Suzuki. For the Swallows in 2009, Aoki fell to .303/.400/.444 for his lowest average since becoming a regular. He did hit 16 homers, scored 87 runs and drew 75 walks while stealing 18 bases in 28 tries. He finished 6th in the Central League in average, fourth in hits, tied for the most runs (with Tony Blanco and Hayato Sakamoto), was second in walks (trailing Kanemoto), was 6th in steals (but tied for second in times caught stealing) and led in OBP (.012 over Hirokazu Ibata). He won yet another Gold Glove and made the Best Nine, joining Ramirez and Uchikawa. On September 26, 2010, Aoki took Kenichi Nakata deep for his 200th hit of the season. He became the first NPB player with multiple 200-hit seasons; only Suzuki, Ramirez and Matt Murton had reached 200 once. After the 2011 season when he slipped to .292 with 4 homers for the Swallows, he asked to be placed on the posting system on December 12th.

It was reported five days later that the Milwaukee Brewers posted the winning bid at $2.5 million . The Brewers were expected to lose starting first baseman Prince Fielder to free agency, although it was difficult to see Aoki filling such big shoes. On January 17, 2012, as a 4 p.m. deadline was about to expire, he reached an agreement on a two-year deal with the Brewers whose terms were not revealed. He made the Brewers' Opening Day roster as a back-up outfielder and pinch-hitter. He hit his first career home run on April 20th, an inside-the-parker off Jhoulys Chacin of the Colorado Rockies in a rare start in center field. At the end of the game, he was hitting .357 in very limited playing time. Given his hot bat, he quickly secured regular playing time, ending the season as the Brewers' most used right fielder. In 151 games, he hit .288/.355/.433, with 37 doubles, 10 homers and 81 runs scored. He was again the starting right fielder in 2013, playing 155 games with quite similar results: a batting line of .286/.356/.370. His power was down, since although he led the National League with 140 singles, he had only 20 doubles and 8 homers, but did score another 80 runs. On December 5th, he was traded to the Kansas City Royals in return for reliever Will Smith.

Aoki's first home run as a member of the Royals was a grand slam, coming on August 5, 2014 against the Arizona Diamondbacks. He was the Royals' regular right fielder, playing 132 games during which he hit .285 with 63 runs scored and 43 RBI; he stole 17 bases in 25 attempts. The Royals made the postseason for the first time since 1985 and Aoki was the team's number 2 hitter, being a big contributor to their reaching the 2014 World Series. He scored a run in the Wild Card Game, then hit .333 in the ALDS and .273 in the ALCS. His bat went cold in the World Series, as he was limited to one hit in 14 at-bats. He became a free agent after the season and on January 16, 2015 signed a one-year contract with the Royals' World Series opponents, the San Francisco Giants. Between the two teams (not counting the postseason) he crafted a career-best 17-game hitting streak spread over two seasons, which ended with an 0-for-3 day against the Colorado Rockies on April 15th. On June 21st, he was hit by a Carlos Frias pitch facing the Los Angeles Dodgers and suffered a small fracture in his leg, putting him on the disabled list. He hit .287 in 93 games for the Giants, then moved to the Seattle Mariners in 2016. In 118 games, he continued to hit for a decent average and OBP - .283 and .349, respectively - albeit with limited power: 4 homers and 28 RBI.

On June 11, 2017, playing for the Houston Astros, he joined the meikyukai by collecting his 2,000th career hit between Japan (where he had 1,284) and MLB (716), as part of a three-hit game. He played 71 games for Houston, hitting .272 with two homers and 19 RBI while playing left and right field. On July 31st, he was sent to the Toronto Blue Jays, along with Teoscar Hernandez, in return for pitcher Francisco Liriano. A month long stint there ended with his release, and he caught on with the New York Mets for the season's final month. In January 2018, Aoki agreed to a three year deal to return to Nippon Professional Baseball, signing with the Tokyo Yakult Swallows. He was named to the 2018 All-Star team and reached his 4,000 at bat in the circuit. In doing so, he became NPB's all-time batting champion, with his career mark currently sitting at .328.