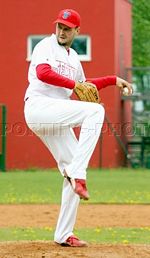 Michal Kočí played for the Czech national team several times. He allowed one run in two innings in the 2001 European Championship and was 0 for 1 at the plate with a walk and a run. During the 2002 World University Championship, he went 2 for 16 as the Czech first baseman; on the mound, he was 0-1, allowing six runs in six innings.