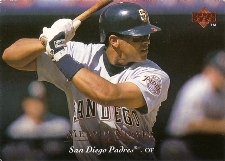 Melvin "Mel" Nieves was signed by the Atlanta Braves in 1988. His uncle (by marriage) is José Morales.

Nieves started his professional career fairly poorly. In 56 games with the GCL Braves in 1988, he batting average was a poor .170. He was only 16 years old at that time.

His 1991 season with the Durham Bulls was less stellar than his previous season - he hit only .264 - but he remained consistent in the home run category, again hitting 9.

He did very well in 1992, hitting a combined 26 home runs between the Bulls and Greenville Braves. This prompted his promotion to the Majors, and he made his debut with the big league Braves on September 1st. At the age of 20, he was the youngest person to don a big league uniform that season. His first stint in the majors was less than impressive: in 19 at-bats, he hit only .211. He collected his first big league hit off the infamous Anthony Young of the New York Mets in his second career at-bat on September 2nd.

He started the 1993 season in the Braves system, hitting .278 with 10 home runs in 78 games with the Richmond Braves, before being traded with minor leaguer Vince Moore and Donnie Elliott to the San Diego Padres for Fred McGriff in July. In 43 games with the Padres' AAA team, the Las Vegas Stars, he hit .308 with 7 home runs. He spent 19 games in the Majors in 1993, hitting an unimpressive .191. He did hit his first career home run that season, a solo shot off pitcher Chris Hammond on September 8th. He was the seventh youngest player to don a uniform in 1993. According to Baseball America, he was the 39th best prospect in 1993.

His 1994 season was perhaps the best of his professional career. Baseball America says he was the 69th best prospect in 1994. In 406 at-bats with Las Vegas, he blasted 25 home runs and drove in 92 runs, all the while hitting .308. A poor eye at the plate led him to 138 strikeouts, though. That earned him a promotion to the majors, where he for once was somewhat impressive: in 19 at-bats with the Padres, he hit .263. He spent all of 1995 with the Padres. In 234 at-bats, he hit only .205 with 88 strikeouts. His 14 home runs were overshadowed by the large number of whiffs. He hit the only two grand slams of his career in 1995. The first came off Terry Mulholland on August 2nd and the second off Doug Henry on August 26th.

Perhaps it was his poor performance in 1995 that prompted the Padres to trade him. On March 22, 1996 - just before the beginning of the season - Nieves was traded to the Detroit Tigers with Raul Casanova and Richie Lewis for Sean Bergman, Todd Steverson and Cade Gaspar, a minor leaguer.

His 1996 season was undoubtedly the best of his career, but overall not a great season. He played in 120 games with Detroit that season, hitting 24 home runs and driving in 60 RBI. His batting average was only .246, though, and he struck out 158 times in 431 at-bats, a Rob Deer-esque output. Perhaps the most memorable game of his 1996 season was on April 6th against the Oakland Athletics when he collected two doubles, a triple and a home run. Twice in 1996 he also accomplished the fairly rare feat of hitting home runs from both sides of the plate in a game. The first time he did it was against the Milwaukee Brewers on July 15th - he victimized pitchers Ricky Bones and Mike Potts. The next time he did it was on August 20th against the Chicago White Sox. In that game, he victimized pitchers Kevin Tapani and Rich Sauveur. Oddly, those were the only two games in his career in which he hit two or more home runs.

On November 11, 1997, he was traded from the Tigers to the Cincinnati Reds for Paul Bako and Donne Wall. Although he played 15 games and hit .283 in the minors with the Indianapolis Indians in 1998, he spent most of the season as a bench player with the Reds, getting 119 at-bats in 83 games. He hit .252 in that time. That would be the last of the majors he would see. He played his final game on September 14th. He finished his big league career hitless in his last 10 at-bats.

Although his big league career was over, his professional career was far from it. Starting in 1998, he has been bouncing around the minors, playing affiliated, foreign and independent baseball. He has spent time in Japan, Mexico and the Atlantic League, just to name a few locations. Most recently, he spent 16 games with the Joliet Jackhammers of the Northern League in 2006 and also appeared briefly with Vaqueros Laguna in 2008 to put an end to his professional career.

Overall, he hit .231 with 63 home runs and 187 RBI in the Majors. He played in 458 games, collected 284 hits, walked 136 times and struck out 483 times. According to Baseball Reference, he is most related to Ryan Thompson statistically. He has spent seven professional seasons with Tony Tarasco - longer than any other teammate.

At last check, he lived in Southern Pines, NC.

Melvin played for the Santurce Crabbers of the Puerto Rican Winter Baseball League.