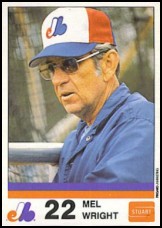 After his playing career ended, Mel Wright was a coach for the Salt Lake City Bees in 1962 and the Chicago Cubs in 1963 and 1964. He scouted for the Cubs from 1965 to 1967, coached the Tacoma Cubs in 1968, managed the Huron Cubs in 1969, then returned to scouting from 1970 to 1972. He joined the Pittsburgh Pirates as a pitching coach under manager Bill Virdon in 1973; the two had been teammates with the St. Louis Cardinals in 1955 and before that in the New York Yankees farm system and had remained friends since. Wright then followed Virdon to the Yankees in 1974 and 1975, to the Houston Astros (from 1976 to 1982), and finally to the Montreal Expos for the 1983 season.

Mel Wright missed half of the 1982 season as he was fighting cancer. He was in remission when he joined the Expos, but the disease returned with a vengeance at the end of spring training and he left the team permanently before opening day in order to resume treatment. He was replaced as bullpen coach by Joe Kerrigan and died a few weeks later in Houston, TX, where he was undergoing treatment. His death was a huge blow to his close friend Virdon, especially as Wright was the only person he was allowed to bring with him when he joined the Expos as a manager before the 1983 season.