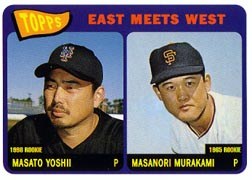 Masato Yoshii was drafted by the Kintetsu Buffaloes in the second round of the 1984 draft. Yoshii reached the Buffaloes' ichi-gun (top team) in 1985, pitching in two games. He had ERAs over 20 in limited duty in 1985-1986 and did not see regular duty until 1988, when he went 10-2 with 24 saves and a 2.69 ERA in 50 games and as a result was named the Fireman of the Year. He was one save behind Pacific League leader Kazuhiko Ushijima.

In 1998 he became a free agent. He initially had wanted to stay with Yakult but was pressured to leave by agent Don Nomura, who claimed he would be standing up for his rights and showing an example for the next generation. Nomura denied that team loyalty should play a role. When Yakult refused to extend Masato's contract by two years, he began fielding extravagant offers from the Seibu Lions and Hanshin Tigers ($5 million over 4 years), Yokohama BayStars ($7 million) and Yomiuri Giants ($9 million). Yoshii was interested in joining Yomiuri but Nomura kept on encouraging greed, saying he should ask for another $4 million and cut back on his workout. Manager Shigeo Nagashima agreed but the Giants' general manager refused, which was a rational response given that Yoshii was already demanding more in salary than he was probably worth.

Former teammate Hideo Nomo convinced Yoshii to look into joining an American team. Yoshii responded by refusing all the million-dollar offers to sign with the New York Mets for $200,000 with performance bonuses that would push his salary over one million dollars in his first year.

As a result of poor analysis of the effect of Coors Field on pitchers, Yoshii was released by the Rockies in March 2001 and was signed by the Montreal Expos. Masato went 4-7 with a 4.78 ERA in 42 games that year, mostly out of the bullpen. In Yoshii's final year in the majors, he went 4-9 with a 4.11 ERA in 31 games. His ERA+ never fell below 97 in the majors and was 101 for his career. His record was less flattering (32-47). Yoshii had shown that even a non-star from Japan could achieve success in Major League Baseball.

At age 38, there were few MLB teams interested and Yoshii was signed by the Orix Blue Wave in 2003. He struggled badly, going 2-7 with a 6.51 ERA in 24 games. During the 2004 season he spent most of the year with the Surpass Kobe, Orix's ni-gun team and only appeared in three games with Orix. Yoshii experienced a recovery, with a line of 6-5 with a 4.03 ERA in 15 games with the newly-merged Orix Buffaloes in 2005. After Jeremy Powell and Hidetaka Kawagoe, he was the club's most reliable starter, even at age 40. The old-timer remained fairly effective in 2006, going 7-9 with a 3.81 ERA and only 22 walks in 101 2/3 IP. He even made his fifth All-Star team.