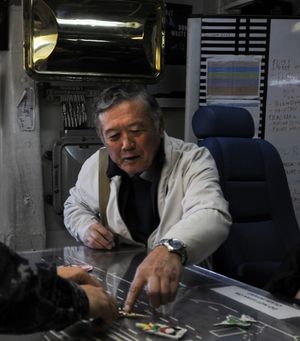 Murakami's father was very controlling and refused to let his son play baseball much as a kid. In his second year of middle school, Murakami began playing secretly and only won the approval of his father under the condition that he continue to study earnestly, as his dad wanted him to be a doctor.

Murakami's high school team was very successful. In 1960 and 1961, they won the National High School Tournament at Koshien, perhaps the biggest annual event in Japanese baseball. Murakami was the #2 pitcher on those teams but only appeared once.

After 3 years of high school, Murakami's family was approached by Kazuto Tsuruoka, the manager of the Nankai Hawks (he is the all-time leader in managerial wins in Nippon Pro Baseball and helped develop the minor leagues there). Murakami signed with Nankai and went to spring training with the club. He pitched 2 innings in 1963 for the Hawks, allowing one earned run. After adjusting his delivery at the request of the pitching coach, he injured his elbow.

A relative non-prospect, Murakami was sent with two other young non-prospects to the San Francisco Giants to develop his skills in the low minors. Both the NPB and MLB commissioners' offices had signed off on the Nankai-San Francisco development deal, wherein the teams would agree to send players back and forth to train in the minors. The agreement included a clause that gave the Giants the ability to buy the contract (for $10,000) of any of the Nankai prospects who made the Giants. Nankai GM Makoto Tachibana was sure that none of the players sent to the States stood a chance of making the majors.

Murakami, the brighest of the three non-prospects, was assigned to the class A Fresno Giants in the California League. The language barrier was huge - when manager Bill Werle brought out uniforms for players to select, Murakami did not understand what to do and had to take the only two uniforms left at the end, which thankfully fit. The home uniform was number 6 and the road uniform number 8, but the manager told him it was okay to use different numbers for different games.

Murakami was initially used as a closer for Fresno, hurling the final 3 innings. He put together a great season, stunning everyone by going 11-7 with a 1.78 ERA. Werle told him "Kid, you're too good for this league." Murakami was called up by the Giants in September. They weren't exactly greeting him with open arms - no one from the team met him at the airport and his name wasn't on the hotel ledger. After 20 minutes, the team's traveling secretary showed up and got him a room. It took a long time to get Murakami to sign his major-league contract, as Japan did not have separate major and minor league contracts then and players only signed once a year. A Japanese fan at the game had to explain things to Murakami for him to sign in time to play.

In his MLB debut, he pitched a scoreless inning against the New York Mets at Shea Stadium in front of 50,000 fans. His first eleven innings in the majors were scoreless. He quickly became a hero in San Francisco, especially with the Japanese community there. Murakami's Japanese habits like bowing to a teammate who made a good defensive play helped endear him to the fans. Murakami said it was easier pitching in the US than in Japan - "In Japan, batters only swing at strikes. Here, they try to hit everything out and they don't care if you throw a strike or not. It's easier to pitch against them." He became the top cultural icon in Japan and posted a 1.80 ERA on the year. San Francisco, thrilled with his work, signed him for 1965 and the Giants wired the $10,000 to Nankai. With the deal presumably closed, Murakami wanted to stay to play winter ball in Arizona but a Nankai official told him to return to Japan so he went to Yamanashi to spend the winter with his family.

Nankai officials convinced Murakami he should stay in Japan, so he signed with their team for 1965 as well. On January 31st, right before spring training began, he called a press conference and said he would remain in Japan because he was an only son and needed to be with his father and in his native country. MLB owners saw this as a violation of MLB's reserve clause. Commissioner Ford Frick wrote to his NPB counterpart, Yushi Uchimura, demanding that Uchimura encourage Nankai to send Murakami to San Francisco. Uchimura agreed but the Hawks wouldn't budge. Hawks GM Shigeru Niyama said the team had spent 10 million yen (about $30,000) as a signing bonus for Murakami and had no intention of having him play elsewhere - they had merely rented him to the Giants' organization for a year. They had thought the $10,000 from the Giants was a bonus for the fine work the young lefty had done. They said that the Japanese reserve clause protected their right to Murakami. Frick refused to budge as well. Japanese baseball historian Robert Whiting argues that the conflict boiled down to a difference of cultural views of contracts - Japanese believed in the spirit of a contract and the mere words didn't matter so much, while Americans were concerned about the letter of the contract. He also argues that the Hawks had ignored the option clause in the deal with the Giants, as they hadn't expected any of their players (being very low prospects) to make the majors.

Things actually got worse from there. Nankai claimed the team signature on Murakami's release was a forgery. They then fell back on a "homesick clause" in the original agreement for players who couldn't adapt to America. As Murakami had expressed interest in staying in San Francisco, Frick said this did not apply. The Hawks then said that they would refused to send Murakami to the States. On February 17, 1965, Frick cut off baseball relations between the countries. He told the Pittsburgh Pirates to cancel a fall trip to Japan. Nankai Hawks president Osamu Tsubota said that this was no big deal and that "Frick's actions are proof that he is holding Japanese baseball cheap."

Uchimura then finally reviewed the Hawks-Giants agreement for himself and found that it was very difficult to understand and that the Hawks might not have known what they were getting into. He came up with a compromise decision on March 17th that Murakami could go the Giants for the 1965 season but in 1966 would be back in Japan. He faulted the Hawks for not reviewing the agreement closely and the Giants for not realizing that Nankai had no plans to give up a prized prospect to America. Frick insisted that this still violated the MLB reserve clause. Things finally came to an amicable agreement when Murakami's father explained that he would never allow his only son (a minor at the time of the agreement) go to America for good. Frick and the Giants' Horace Stoneham agreed with this logic and said that Murakami would pitch in America in 1965, had the option to return to Japan in 1966 and the Hawks agreed to send the $10,000 back to San Francisco.

Murakami returned to the Giants in May and pitched well, going 4-1 with 8 saves and a 3.75 ERA (96 ERA+) in 45 games. The Giants lost a close pennant race to the Los Angeles Dodgers and Murakami voiced the opinion that they would have won had he been able to join the team sooner. In August, the Giants honored Murakami with a day on August 15, 20 years after the end of World War II.

Murakami considered returning to the Giants in 1966 and some in the Japanese media villified him as selfish. The Giants offered to double his salary from $15,000 and offered to bring his parents to the US for a month, but Murakami signed with Nankai for "somewhat less than $30,000." While Murakami said he felt obligated to the team, others said his father applied considerable pressure, especially when he found out that his son had a blond stewardess girlfriend in America.

Nankai decided to keep him in the bullpen role he held in the US - they had a formidable starting staff and had no need for him in that role. A radio commentator noted that his delivery had changed and when he tried to return to his old form, he was off-balance and struggled. The 1966 Pacific League was a pitcher's circuit - the league ERA was 2.88 and first-place Nankai had a 2.59 team ERA. Of 8 pitchers on the team with 50+ innings, Murakami was 7th in ERA at 3.09 and he went 6-4 for a team that was otherwise 73-45. The next year he did even worse, going 3-1 with a 4.05 ERA. Fans began taunting him to "Go back to America!" The papers derided bad American habits he had learned and said he didn't seem to get along with his teammates (he had gotten along great with his Giant teammates in San Francisco.) Needless to say, expectations had been high and Murakami was not performing anywhere close to what was hoped. He had an offer from the president of the Yokohama Company to try to get him another year in the majors, but he turned it down out of respect for Tsuruoka. Murakami recently said "If I had returned to the Major Leagues, I would have realized my dream, but I would have betrayed Mr. Tsuruoka. Yet, because I kept my promise to Mr. Tsuruoka, I forever carry this sense of regret."

Murakami was traded to the Central League Hanshin Tigers in 1975, along with Yoshihiro Aiba in exchange for Toshio Nogami and Toru Wada. A change in scenery meant little as he went 2-1 with a 5.21 ERA in 18 games. In 1976, he returned to the Pacific League with the Nippon Ham Fighters (in a deal with Kazuaki Goto for Masayoshi Nigashida) and began to piece his career back together with a 3.74 ERA as a middle reliever. In 1977, he cut it down to 2.33, his best mark in 11 years, and went 7-4 with 6 saves in 61 appearances as the league's most-used reliever. He was 12-11 with 10 saves and a 3.02 ERA in 1978, again leading the league in games pitched with 57. He lasted four more years with Nippon Ham, going 8-7 with 13 saves but posting ERAs over 4 every year. He was seeing less and less action - from 98.7 innings in 1979 to 67 in 1980 to 20.3 in 1981 to 2 in 1982 (just as he had started in 1963). During the 1983 season, Murakami attended spring training with the San Francisco Giants, and almost made the team. Whiting notes that he frequently would reverse course on whether he regretted his decision to return to Japan, sometimes saying he did what was right, sometimes that he should have gone to the US again.

Following his long career, Murakami became an announcer for the NHK network.

Sources: "The Meaning of Ichiro" by Robert Whiting, www.japanbaseballdaily.com, "Remembering Japanese Baseball" by Rob Fitts (both books are excellent resources on Japanese baseball - I highly recommend them)