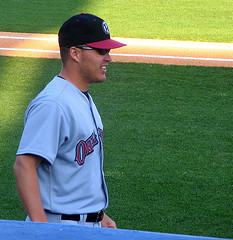 Marshall McDougall is most famous for hitting six home runs in a game in college.

McDougall burst into the national spotlight, becoming a top story on shows like SportsCenter, when he hit a record six home runs in a game against Maryland on May 9, 1999, during his time at Florida State University. After starting with a single, Marshall hit six consecutive home runs and drove in 16 runs in a 26-2 rout of Maryland. His mark broke the home run record set by Henry Rochelle of Campbell University, who hit five homers in a game in 1985. The RBI mark was held by Jim LaFountain of the University of Louisville who drove in 14 against Western Kentucky University in 1976. Additionally, he set the NCAA Division I record with 25 total bases in the game. Eight years later, McDougall said he was tired of talking about his record-setting day after a month, wondering how much you can say about one game, though he continued to be asked about it.

He hit .419/?/.814 overall on the year and led NCAA Division I in hits (126), RBI (106), total bases (242) and runs (104). He stole 22 bases, hit 28 homers and 26 doubles. He tied for 5th in NCAA Division I in home runs. His 33-game hitting streak was one of the longest of the year. He led the Atlantic Coast Conference in average, runs, hits, RBI and homers. He made the ACC All-Conference team and was named Player of the Year. He was a consensus first-team All-American. In the 1999 College World Series, McDougall was named the College World Series Most Outstanding Player as FSU finished second. The Boston Red Sox took him in the 26th round of the 1999 amateur draft; he did not sign.

In 2005, McDougall had a big year for Oklahoma, producing at a .341/.416/.578 clip in 57 games. He made several appearances for the 2005 Rangers in a bench role, going 3 for 18 with 3 runs, a double and 10 strikeouts in 18 games. He played five different positions but only had four starts in 90 days on the Rangers roster. On June 29, he injured his wrist while sliding into third base and needed cortisone shots all year. After the season, it was discovered that he needed surgery on two bones and tendons.

With Hank Blalock, Michael Young and Ian Kinsler in the Rangers infield, McDougall had little shot of making the club in 2006. He was 3 for 14 for Oklahoma and needed a second operation on his wrist. He played Winter Leagues ball and hit .256/.360/.581 with 4 homers in 12 games for the Algodoneros de Guasave in the Mexican Pacific League after getting medical clearance, but was hit on the wrist by a pitch in his 12th game, reinjuring it.

McDougall came to play in Taiwan for 2010, signing with the Uni-President Lions. On March 20, Opening Day, he hit 6th and played third base, going 0 for 3 against Jim Magrane. He hit .297/.351/.438 for the club and was leading them with eight homers when he was released in August. He had been fielding .911 at third base.