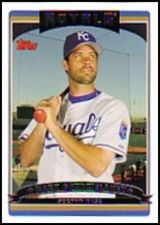 Mark Grudzielanek was the Eastern League MVP with the Harrisburg Senators in 1994, then made the Montreal Expos' opening day roster at the start of the 1995 season. He was a utility infielder that first season, and was sent back to the minors for a while with the AAA Ottawa Lynx, but in late August, he was called back and took over at shortstop for Wil Cordero, whose numerous errors had soured the Expos' brass. Cordero was traded to the Boston Red Sox after the season and Grudzielanek was installed as Montreal's starting shortstop at the start of 1996. He responded by hitting .306, scoring 99 runs and collecting 201 hits, being named to the All-Star team and stealing 33 bases in 40 attempts as the Expos fell just shy of being the National League's wild card team that year. Still, because he drew very few walks, his OPS+ was only 93 in spite of impressive counting stats.

In 1997, he led the NL with 54 doubles and hit .273, but his OBP was only .307, leading to an OPS+ of 81. In 1998, the Expos traded him in mid-year to the Los Angeles Dodgers along with P Carlos Perez and prospect Hiram Bocachica, in a deal that landed them Peter Bergeron, Wilton Guerrero and Ted Lilly. He hit .264 with little power for the Dodgers the rest of the way, as his OPS+ for the year fell even further, to 89. He then bounced back by having his best season for the Dodgers in 1999, hitting .326 with an OPS+ of 111. In 2000, the Dodgers moved him to second base, which was a good thing as he went from being a mediocre defender at shortstop to a very good one at second base. However, he went back to hitting relatively poorly, with his OPS+ settling in the 80's from 2000 to 2002. He did score 101 runs in 2000, the highest mark of his career.

Before the 2003 season, he was traded to the Chicago Cubs along with 1B Eric Karros in return for C Todd Hundley and OF Chad Hermansen, which turned out to be an excellent trade for the Cubs. He had a very solid first season in Wrigley Field, forming a solid double play combination with SS Alex Gonzalez and hitting .314 with 38 doubles. The Cubs fell just short of finally making it back to the World Series that season and he started all 12 playoff games at second base. He was only 3 for 20 in the Cubs' defeat of the Atlanta Braves in the NLDS - their only win in a postseason series since the 1908 World Series - and then was 6 for 30 with a double and a triple in the NLCS, when they lost to the Florida Marlins after a dramatic collapse in the 8th inning of Game 6. He then missed almost half of the 2004 season with an injury, but did hit .307. In 2005, he moved to the St. Louis Cardinals and returned to the postseason as he hit .294 in 137 games. Again, he fell short of the World Series, as the Cardinals lost to the Houston Astros in the 2005 NLCS; he went 7 for 35 between the two rounds of the postseason. He moved again at the end the year, this time joining the Kansas City Royals, where he stayed from 2006 to 2008. His lowest batting average those three years was .297, and he won a Gold Glove at second base in 2006. However, the Royals were never in contention, and his play went pretty much under the radar.

When the Royals let Mark go at the end of the 2008 season, it appeared his career was over, as there was little demand for a middle infielder about to turn 39. Still, he wouldn't give it up, and signed with the Minnesota Twins in July of 2009, but never made it out of the minors. However, in 2010, he was back in the majors for a brief period, playing 30 games for the Cleveland Indians at age 40. He could still hit for a decent average - .273 - but all his hits were singles and he still did not draw many walks. The Indians gave him his walking papers on June 10th and this time his career was truly over at age 40.

Grudzielanek became a manager with the Kane County Cougars in 2015. The Arizona Diamondbacks converted him to a minor league assistant hitting coordinator for 2016. In 2017, he was named manager of the Charlotte Knights and stayed in that role through 2019. His nephew, Brandon Grudzielanek, is a minor league player.