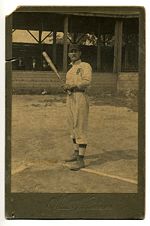 Luis excelled at the plate in 1902 for the unbeaten Havana team, which did not need him to pitch, as Carlos Royer went 17-0 for the 17-0 team. Padrón led the CWL in average (.386), triples (4), home runs (2) and slugging (.561). In '04, he went 3-0 for Havana and hit .250, slugging .304 as a 3B-OF-P. He went 2-0 against a visiting minor league team and 1-1 against a mixed major/minor team, then beat another minor league team twice in a long exhibition summer. In 1905, Mulo went 1-0 for Havana and was just 1 for 21 at the plate in an off-year. He split two decisions against the Cuban X-Giants in an exhibition series and beat the Lynn Shoemakers. He played for Poughkeepsie in 1905; on July 9, he hit two three-run home runs in Newburgh while being taunted from the crowd about being a "nigger"; the two blasts helped give the game to the Colts.

The '06 year saw Luis post a 1-3 record while batting .258 and slugging .339 at third base. He also played in Mexico for Mexico City and Yucatan and hit 3 home runs in one game, earning him a gold watch. He joined the Poughkeepsie Colts and starred for them, after which he was purchased by the Jacksonville Jays. While Luis integrated the South Atlantic League, the credit went to a group of five players in 1953 including Hank Aaron, Felix Mantilla and Horace Garner; the league had not had any black players since Mulo before Aaron and company but Padrón still deserves credit given the racist attitudes of the era. A newspaper column in 1906 noted his lack of sliding when stealing bases.

He batted .288/.331/.369 in the 1907 Winter League year and led the league in slugging and homers (2). He was third in hits and second to Regino Garcia in batting average. On the mound, he went 2-2 with a 4.17 ERA. He lost one exhibition game to the Philadelphia Giants and then lost another to a group of major and minor leaguers.

In 1908, he led the CWL in home runs yet again (3) and stole 21 bases while batting .279 and slugging .384. He scored 40 runs in 43 games. In addition to playing third, he returned to the mound regularly to go 9-2 for the champs. He spent the summer with the New Britain Perfectos in the Connecticut League and did well. When the Americans came to Cuba that winter, Luis split two games with the Brooklyn Royal Giants and went 9-1 against the Cincinnati Reds.

Padrón led the CWL in home runs for the fifth time with 3 in 1908-09, went 7-3 on the mound and batted only .202 overall. He was a solid second-line starter behind ace Rip Hagerman. In July of 1909, the Cuban Stars brought Luis to the US and the 1909 White Sox gave him a try-out. The Washington Post reported that he signed with Chicago and the Chicago Tribune reports he did well in his try-out as an outfielder for the club, needing some help there. A Cuban paper predicted his success in the majors. He never did appear in Chicago there and some cite racism as the reason. Instead, Luis spent the summer with the Cuban Stars.

In exhibition play that winter, he lost one to the Indianapolis Indians. In 1910, Mulo tied for the CWL home run lead with one and batted .240 in the Havana outfield, not pitching at all. In 1910-11, he was 0-1 for Havana and hit .258, slugging .309 and scoring 20 runs in 28 games. He joined the Mansfield Brownies in 1911 and batted .308/~.360/.493 and went 1-1 on the mound. Despite being the team's top offensive player, he was released. The local paper claimed he was not in condition but the nearby New Castle News attributed the release to racism with an article headlined "Padrone's Dark Skin Lost Him His Job in Mansfield."

The veteran took a couple turns against the 1912 Athletics in the winter but got crushed both times, losing two to Jack Coombs. He beat the 1913 Superbas 5-1 and hit .538 against Brooklyn. In '13, he played for the Long Branch Cubans and batted .331 in the New York-New Jersey League, doing well as an OF/3B for the league champs. On August 6, the Boston Braves purchased Padrón, Dolf Luque, Angel Villazón and Angel Aragón from Long Branch. The New York Yankees protested, claiming they had already acquired the players, but the ruling went Boston's way. None of the four players ever appeared in a Boston uniform.

In 1943, Luis was voted into the Cuban Baseball Hall of Fame.

Sources have listed Padron as left-handed but pictorial evidence has shown him in poses of a right-handed batter and pitcher; given that these sources confuse him with Juan Padron, the handedness is not reliable in them either. Additionally, even in his era, left-handed infielders were rare outside of first base and Padron regularly played third base.