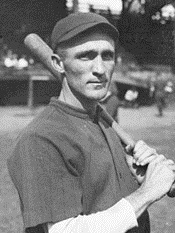 Lew Moren, from Pittsburgh, PA, pitched six seasons in the majors for teams based on Pennsylvania, primarily the Philadelphia Phillies. In perhaps his best year, he went 16-15 in 1909 for a team which finished under .500.

Lew was the first major leaguer out of Duquesne University, and he made his major league debut shortly after he turned 20 years old. It was said he was a frail child, but eventually he became a baseball success. However, he was plagued with arm problems.

In 1912 it was reported that he would inherit several hundred thousand dollars from his father's estate. His father, Captain Moren, was a boat captain. His brothers, Arthur and Paul, also worked in shipping - in 1906 they were said to be in charge of unloading 2,000 barrels of sugar that had been shipped from New Orleans. The brothers were said to be good friends with Jimmy Archer.

In January 1914 it was reported that he planned to go to spring training again with the Phillies.

"Tom Needham went up to Lew Moren's dad, and remarked "I ought to know you, Captain. You were born near Toronto, Ohio. Well, years ago I drove a mule at Sligo, nearby." - comment by long-time major leaguer Tom Needham to Lew Moren's father, a riverboat captain