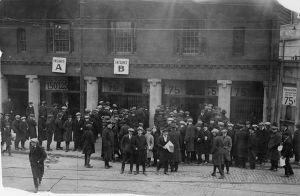 Cleveland's League Park was the first field to house both a National League team and an American League club. The park was built in 1891 as home for the National League's Cleveland Spiders after their previous stadium was destroyed by fire. Located near Cleveland's main streetcar lines, League Park consisted of a single deck of wooden stands behind home plate, a covered pavilion behind first base, and small bleachers. The outfield wall was covered with signs, and there were no coaches boxes along the baselines. The park's outfield dimensions were unusual because the field was built around a saloon and two houses whose owners refused to sell their land when the park was constructed. Thus, centerfield was a deep 460 feet, while rightfield was a shallow 290 feet. 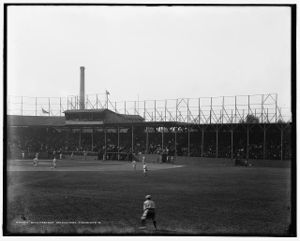 During a 1892 Spiders game against the Chicago Colts, lightning struck League Park, setting a small fire and causing the game to be cancelled. In 1897, spectators were arrested during the first inning of a Sunday afternoon Spiders game here for violating local blue laws. After the 1898 season, Spiders owner Frank Robison also purchased the St. Louis Cardinals and stocked the team with Cleveland's best players. Thus, in 1899, the Spiders won only 20 games, the fewest in major league history, while drawing only 6,088 over the course of 24 home games at League Park (the team played all of its late-season home games on the road, as fans in their home city would not come out to see such a sorry outfit play). Not surprisingly, after the season, the National League dropped its Cleveland franchise. However, the newly-formed American League took advantage of this void, and the Cleveland Blues, the team that would eventually become the Cleveland Indians, began play here the next year. The Blues, Bronchos and Naps, as the team was variously nicknamed during that period, called League Park home through the 1909 season, after which it was demolished to make way for the second League Park on the same location.