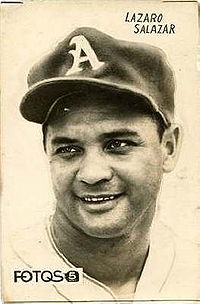 Like contemporary and fellow Cuban Martin Dihigo, Lázaro Salazar was known for being both a very good hitter and a very good pitcher. Not as good a slugger or pitcher as Dihigo, Salazar also lacked his versatility in the field, playing first base and the outfield when not pitching. He also had an excellent career as a manager, even though he died in his mid-40s. Known as a sharp dresser, he helped bring American players into both the Cuban Winter League and Mexican League.

There is a lot of uncertainty about Salazar's birth date. Different sources list it as February 4 or December 12 or December 17, and the year as 1911 or 1912. However. December 17 is the feast day of Saint Lazaro, his namesake, so this lends credence to that being the tue date. He also wore number 17, another sign that this date is the most likely one.

Salazar is listed in The Biographical Encyclopedia of the Negro Baseball Leagues as pitching for the 1924 Cuban Stars. Though a Lazaro Salazar went 3-8 for this club, it unlikely that it is the same player - he would have been 12 years old, leading one to conclude that this was either a desperate team (unlikely), one using a young player as a stunt (in a country away from home all summer?), there is an error in Salazar's age or that it is a different Salazar.

With the New York Cubans in 1935, Salazar batted .390, fifth in the Negro National League. He led the league with 15 doubles and was third with 6 triples. Moving from first base to the outfield in 1937, Salazar hit .371 for the Cubans, second in the NNL behind Shifty Jim West (.384). Lázaro was tied for second in the league with six doubles and stole 4 bases, leading the loop. He did not pitch in his two years with the New York Cubans. He hit .313 in the CWL in 1936.

Going to the Dominican Republic in 1937 as part of Rafael Trujillo's attempt to bring top-flight baseball to the island, Salazar hit .292, lost both games he pitched, scored 31 runs in 31 games (leading the league), tied Josh Gibson for the triple lead and was second in hits. He was also the manager of the champion Ciudad Trujillo club.

Lázaro Salazar led his Cuban Winter League Santa Clara club to titles in 1937-1938 and 1938-1939 after taking over as manager and recruiting many Americans. The MVP in 1937-1938, he hit .318 (second to Sammy Bankhead and ahead of four future Hall-of-Famers and several major leaguers) and won all three games he pitched.

In 1940 Salazar only played seven games in Mexico and did not appear in the Negro Leagues (he had been banned from the Negro Leagues in 1937 for his role in convincing other players to play in the Dominican Republic). In the 1940-1941 Cuban Winter League season, he won another batting championship (.316). In 1941, Lázaro hit .336/~.428/.476 in the Liga Mexicana and was 10th in average and RBI (72) for the Veracruz Blues. On the mound, he struggled, going 7-3 with a 5.73 ERA. He was the manager of the championship team once again.

As a pitcher in the Mexican League, Salazar was 112-78, 3.43, and as a hitter he batted .334/~.437/.465. In Cuba he was 35-24 as a pitcher and in the Negro Leagues he hit .382, third all-time behind Chino Smith and Larry Doby. Overall he had batting titles in three countries and had led his leagues in wins, runs, doubles, steals and triples at least once; he was regularly among his league's top 10 in both average and ERA.

After he finished as a player, Salazar remained a manager in Mexico and guided the Mexico City Red Devils to a pennant in 1956, the fourth different team he took to a title, something no other manager in Mexican League history has done. His 7 managerial pennants are also a Liga record; only Cananea Reyes (6 titles) is anywhere close. In 1957, he died of a cerebral hemorrhage suffered a day earlier in the dugout. Seven years later he was voted into the Salon de la Fama as a manager, though his playing credentials may have warranted inclusion even if he had not been one of the greatest managers in Mexican baseball history.