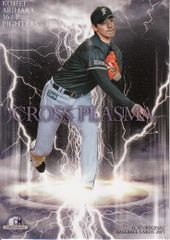 Kohei Arihara has pitched in Nippon Pro Baseball and in Major League Baseball.

Arihara won a Tokyo Big Six University League ERA title in college and made a Best Nine. He was a late cut from the Japanese squad for the 2014 Haarlem Baseball Week. He was 19-12 with a 2.72 ERA in college. The Hanshin Tigers, Yokohama BayStars and Nippon Ham Fighters all took him in the 2014 NPB draft; Nippon Ham won rights to negotiate with him and he wound up signing.

Arihara was a regular member of the Fighters' rotation in 2015 and went 8-6 with a 4.79 ERA. Despite an ERA well above the league average (3.6) and worst of Nippon Ham's four main starters (Shohei Otani, Luis Medina and Mitsuo Yoshikawa joining Arihara), he won the 2015 Pacific League Rookie of the Year Award. It was not a run-away win, as he only had 110 of 230 first-place votes, but second place was no one (57 votes) with the next player being Akihiro Hakumura's 33 votes.

Arihara made the PL team for the 2016 NPB All-Star Game. He relieved Yuji Nishino in the 7th with a 4-3 lead against the Central League. He retired Tetsuto Yamada on a fly, then Seiya Suzuki doubled. Fumihito Haraguchi doubled to tie it then Keiji Obiki singled to put the CL ahead. Arihara calmed down from there, getting the last eight batters he faced (Ryosuke Kikuchi, Wladimir Balentien, Shun Takayama, Takahiro Arai, Yuhei Nakamura, Yamada, Suzuki and Haraguchi). The PL rallied to make it a 5-5 tie. He finished the 2016 season 11-9, 2.94. He was 5th in ERA (between Takahiro Norimoto and Shota Takeda) and tied Norimoto for 6th in wins. He was 13th in voting for the 2016 Pacific League Most Valuable Player Award. He started Game 3 of the 2016 Japan Series and allowed only four hits in seven innings, but one was a Brad Eldred two-run dinger; Naoki Miyanishi relieved with the Fighters trailing the Hiroshima Carp 2-1 but they rallied to win. They would also win the Series.

The Hiroshima native made a comeback in 2019. He made his second PL All-Star team; in the 2019 NPB All-Star Game 1, he relieved Kodai Senga in the third with a 2-0 lead. He allowed two hits and an unearned run in two innings before Miyanishi relieved; the PL won a 6-3 decision. He finished the season with a 15-8, 2.46 record. He finished second in ERA (.51 behind Yoshinobu Yamamoto), first in wins (two ahead of Senga and Taisuke Yamaoka) and second in K (161, 66 shy of Senga). His hits allowed were way down (111 in 164 1/3) from the 2017-2018 seasons. Senga won the Best Nine honors in the PL. Arihara was tenth in voting for the 2019 Pacific League Most Valuable Player Award.

During the 2020 season, he went 8-9, 3.46 in 20 games, with 106 strikeouts in 132 2/3 innings. He was 3rd in the PL in ERA (after Senga and Yamamoto), tied for 7th in wins, led in losses, led in complete games (3), tied for first in shutouts (1), was second in IP (2/3 behind Ayumu Ishikawa) and was 5th in K (between Hideaki Wakui and Norimoto). On November 26th, he was posted by Nippon Ham, making him available to teams from Major League Baseball. On December 25th, it was reported that he had come to terms with the Texas Rangers, on a two-year contract worth $6.2 million.

Facing the Kansas City Royals as the Rangers' starting pitcher on April 3, 2021, Arihara hit Whit Merrifield to begin his MLB career but then got Andrew Benintendi to hit into a double play and retired Carlos Santana. He got the next four batters to face the minimum through 2 1/3 IP before Hanser Alberto doubled. His first K came later in the day against Santana. Overall, he worked five innings that day and allowed six hits and three runs (one on a solo homer by Michael A. Taylor), fanning one and walking one before Josh Sborz relieved with a 4-3 lead he could not hold on to.