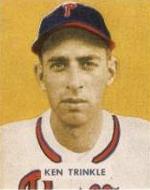 "I was a scout in a reconnaissance outfit. We would go out in front of the infantry to report if anything was there. If you didn’t come back, they knew there was something out there." - Ken Trinkle about his experiences during World War II, as told to The Sporting News and as related at the site Baseball in Wartime

Ken Trinkle pitched five years in the major leagues, leading the National League twice in games pitched. He was also second in saves in 1947.

During his minor league career, which started in 1939 and ended in 1952, he spent seven years in the International League, of which five were with Baltimore.

Trinkle entered the military in September before the 1943 season was over, and played service ball in 1944 with Pete Reiser and others before being shipped out to France. He was in the Battle of the Bulge. After the war ended, he played more service ball. Source: Baseball in Wartime biography of Ken Trinkle

Trinkle, who was on the 1949 Phillies, is mentioned a couple times in the book The Whiz Kids and the 1950 Pennant although he did not pitch for the 1950 Phillies.

The book Negro League Baseball, in discussing the cost of ballplayers at the time, mentions in a footnote that Trinkle was purchased by the Phillies from the Giants for $12,500 or less.