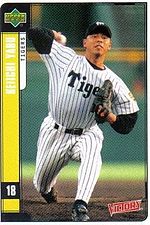 Yabu slipped the next season. In 1996 Hanshin improved, but remained in the cellar, and he led the Central with 14 losses. He also gave up the most hits in the league a second straight season and also allowed the most runs. Over the following 3 seasons, Hanshin remained an also-ran, but Yabu was 32-34, well above the team's winning percentage. In '99, he went 6-16 and led the Central League in losses for the third time. He was 6-14 over the next two years with ERAs over 4.

In 2002 Yabu bounced back, going 10-6 with a 3.14 ERA as Hanshin moved up to fourth. When Hanshin won the pennant the next year, Yabu was no longer the ace, dropping to fourth on the staff behind Kei Igawa, Hideki Irabu and Tsuyoshi Shimoyanagi.

Yabu went on to sign a minor league contract to play with the Colorado Rockies, where he was assigned to minor league camp after a lackluster spring training peformance. Though, later Yabu went on to ask for his unconditional release from the Rockies and became a free agent. He played for the Tijuana Toros of the Mexican League in 2006; after the 2007 season, he signed with the San Francisco Giants and spent another year in the big leagues with them in 2008, going 3-6, 3.57 in 60 games and 68 innings. He was released during spring training in 2009, then signed again with the team, spending some time with the Fresno Grizzlies. He was released again on July 11. Over a year later, he made his return to the diamond, signing with the Rakuten Golden Eagles in late July 2010.