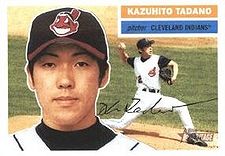 Kazuhito Tadano was a highly touted Japanese pitching prospect. However, his career in Japan was derailed when it became known that he appeared in a gay pornographic video, and no Japanese clubs drafted him. He finally signed with the Cleveland Indians and made a public apology for appearing in the video.

Japanese clubs later got over the incident, as the Nippon Ham Fighters took him in the first round of the 2008 draft when his MLB career ended. He went 7-7 with a 4.78 ERA for the Fighters in 2008.

In the 2002 World University Championship, Tadano fanned 10 and allowed one run in 7 1/3 innings, going 1-0. His 1.23 ERA proved to be the highest on a strong staff which included Daisuke Kato, Hiroshi Kisanuki, Takahiro Mahara and Tsuyoshi Wada.