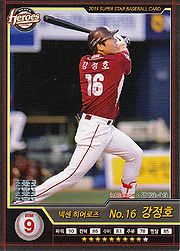 Jung-ho Kang was an infielder in the Korea Baseball Organization for nine years before making his major league debut in 2015.

He made the South Korean team for the 2013 World Baseball Classic but they disappointed, failing to make it out of the first round after reaching the final four in the first two World Baseball Classics. Kang started two games at SS and one game at 3B. He went 2 for 9, with a two-run homer off Hong-Chih Kuo that proved critical in a 3-2 win over Taiwan. He hit .291/.387/.439 in the 2013 KBO season, finishing third in walks (68, behind Byung-ho Park and Tae-kyun Kim), 6th in slugging (between Jung-kwon Park and Byung-hun Min), 8th in OPS, 5th in home runs (22, between Bum-ho Lee and Ji-wan Na), tying Na for third with 96 RBI, tying for 4th in whiffs (109) and tying for first in double play grounders (18). He was picked as the Gold Glove shortstop for the third time.

The KBO went to a much livelier baseball in 2014 and offensive levels exploded. Kang took advantage, hitting .356/.459/.739 with 36 doubles, 40 home runs, 103 runs and 117 RBI. No longer stealing much, he only went 3-for-6 in pilfering bases. He was on the leaderboard in RBI (3rd behind Byung-ho Park and Eric Thames), slugging (1st by .051 over Thames), OBP (2nd, .004 behind Tae-kyun Kim), OPS (1st by 79 points over Byung-ho Park), strikeouts (106, tied for third with Jung-kwon Park), homers (2nd, 12 behind Byung-ho Park), doubles (3rd, behind Geon-chang Seo and Tae-in Chae), runs (5th, between Ah-seop Son and Thames), average (4th, between Ah-seop Son and Hyung-woo Choi), walks (68, 8th, between Tae-kyun Kim and Ho-joon Lee) and hit-by-pitch (13, tied for second with Min-ho Kang and Taek-keun Lee). He was the first KBO shortstop to hit 40 dingers in a year and formed a stellar double play combo offensively with Seo (MVP, batting champion) at 2B and Byung-ho Park (HR and RBI leader) at 1B. Kang won his 4th Gold Glove at SS, joining Jin-man Park (5), Jae-pak Kim (5) and Jong-beom Lee (4) as the only players to reach that many in KBO annals, but Seo easily beat him out as MVP and Byung-ho Park finished second. In the 2014 Korean Series, he homered off Woo-chan Cha in game 1 to give Nexen its first Korean Series win ever but then Kang and Byung-ho Park went cold (going 4 for 41 overall) as the team fell to the Samsung Lions. In the 2014 Asian Games, Kang again helped South Korea to a Gold, drawing a bases-loaded walk in the 8th inning of the finale to tie the game at 3 as Korea would top Taiwan.

On December 15, 2014, Jung-ho was posted by his team, the Nexen Heroes. The Pittsburgh Pirates submitted the winning bid, at $5,002,015, giving them a thirty-day exclusive window to negotiate contract terms with the infielder. There was speculation as to where he would play as the team had Josh Harrison at 3B, Jordy Mercer at SS and Neil Walker at 2B. It was Pittsburgh's first time winning rights to a player under the posting system. The two sides finally came to an agreement on January 16, 2015 on a four-year contract worth $11 million with an option for a fifth season. After a slow first month, he was a big contributor as the Pirates surged back into respectability in May, as he hit .298 with 3 homers and 11 RBIs in 21 games, split between shortstop and third base. He was named the National League Rookie of the Month for July, on the strength of a .379 average, 18 runs scored and 13 extra-base hits. It was the best average by a Pirates rookie in a month since Paul Waner's .381 in September 1926 and the most extra-base hits since Waner's 14. Unfortunately, his season came to an abrupt end on September 17th, when he broke a leg and tore ligaments in his left knee when Chris Coghlan of the Chicago Cubs barreled him over while trying to prevent a double play in the 1st inning of a game with significant postseason implications for both teams. It was a major loss for the Pirates, as Kang was hitting .287/.355/.461 with 24 doubles, 15 homers, 60 runs scored and 58 RBIs, having met and even exceeded all the hopes placed in him at the time of his signing. Worse, not only would he miss the postseason, but he would likely be out at the start of the following season as well, given that the original estimate was that he would need six to eight months to recover.

He was still not ready at the start of the 2016 season, only starting a rehabilitation assignment with the AAA Indianapolis Indians in late April. He hit only .150 in 13 games, but the Pirates added him to the roster on May 6th. He marked his return to the big leagues that day by slugging a pair of home runs to help the Pirates defeat the Cardinals, 4-2. On July 6th, Chicago police reported they had opened an investigation against Kang after a woman claimed that she had been sexually assaulted by him at his hotel on June 17th. No charges were filed in the ensuing weeks, but police qualified the incident as still unresolved. He ended up playing 103 games for the Pirates, batting .255 with 21 homers and 62 RBIs. He was almost exclusively used at third base. He had another run-in with the law on December 2nd, when back in his native Korea, he was arrested for suspected DUI after leaving the scene of an accident in Seoul. He apparently crashed his car against a guard rail in the early hours of the morning, then was found to have a blood alcohol level well above the legal limit for the country. The incident was allegedly the reason for his being left off the roster of the Korean national team for the 2017 World Baseball Classic. He later agreed to enter an alcohol rehabilitation program before the start of the 2017 season. He went on trial in February and was sentenced to a two-year suspended jail sentence. While the sentence was severe, it was thought at first that it would not prevent him from re-joining the Pirates once visa issues were cleared. However, these visa issues turned out to be more complicated than anticipated, as his criminal conviction made him ineligible to receive a United States work visa, and the Pirates were unable to obtain an exemption to circumvent that. He was placed on the restricted list while lawyers were looking for a solution. The conviction was upheld on appeal on May 17th, further complicating his return to the majors; Kang had unsuccessfully sought to have the punishment be reduced to a simple fine, which would have allowed him to return to Pittsburgh without having to jump through immigration hoops.

On April 26, 2018, almost a year and a half after the original incident, Jung-ho finally was granted a work visa to enable him to return to the Pirates; he had been on the restricted list ever since the start of the previous season. The question was how he would adjust back to the major leagues after all that lost playing time. In the immediate, he was sent to the Pirates' minor league complex in Bradenton, FL to get himself ready to play at the major league level again. On May 31st, the Pirates assigned him to the Class A Bradenton Marauders to get some game action under his belt. He was reinstated from the restricted list on June 16th, but was immediately assigned to the AAA Indianapolis Indians, where he had been completing his rehabilitation after hitting .417 in 7 games in the Florida State League. He hit .235 in 9 games for Indianapolis, but his season was then stopped by a wrist injury in June that required surgery, which was performed in August. The Pirates were finally able to re-activate him for the final three games of the season, starting on September 28th. In his first at-bat in nearly two years, he hit a pinch single and went 2 for 6 in the 3 games. Following the season, the Pirates exercised a buy-out clause on a $5.5 million option to keep Kang in 2019, but within days the two sides agreed on a one-year contract worth $3 million, with performance bonuses that could make its total value equivalent to the foregone option year. However, he was not able to find his hitting groove again. On August 5th, the Pirates let him go after he had hit just .169 in 65 games, in spite of 7 doubles and 10 homers. He had 18 extra-base hits, but just 11 singles and 11 walks, while striking out 60 times.

On May 26, 2020, the KBO handed Kang a one-year suspension and assigned him to perform 300 hours of community service in reaction to the DUI incidents that had derailed his U.S. career. This was in reaction to his declaring an end to his "voluntary retirement" from the KBO a week earlier. The league had not had to deal with his trespasses before that, given he was no longer active in Korea, but now that he was seeking a possible return to the circuit, the organization found it necessary to act.