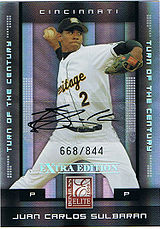 Juan Carlos Sulbaran made his Dutch national team debut during the 2008 Olympics.

Sulbaran was voted the best pitcher in the 2004 Latin American Youth Baseball Tournament while playing for the Netherlands Antilles. He came to the USA in 2006 to play high school baseball. He missed most of 2007 with injury, though he struck out 24 in 12 innings. In 2008, he went 11-0 with a 1.40 ERA, striking out 88 in 67 innings and allowing 31 hits to help his team to a state championship. The Cincinnati Reds chose Sulbaran in the 30th round of the 2008 amateur draft. Sulbaran also had a scholarship offer from the University of Florida.

Juan Carlos joined the Dutch Caribbean entry for the 2008 Haarlem Baseball Week and got a no-decision against the Cuban national team. He allowed one hit and one run in 7 innings and struck out 6 but walked 7. The only run was a steal of home by Giorvis Duvergel. The performance earned him a spot on the Dutch squad for the 2008 Olympic team. He was the only player on the team who had never appeared for the "Orange" before.

In the 2008 Olympics, Sulbaran again was called on to face Cuba and allowed 2 earned runs (5 total runs) in 4 2/3 IP in a respectable showing, but lost to Jonder Martínez. The big problem was control as he walked 3, hit 3 and threw a wild pitch - Cuba failed to get a hit in the first but scored anyways thanks to Juan Carlos's wildness.

Following the Olympics, Sulbaran was signed by scout Tony Arias for the Reds for $500,000, bypassing a scholarship to the University of Florida. He was on the Dutch roster for the 2009 World Baseball Classic. In the Classic, he had the highest ERA on a strong Dutch staff, giving up 5 hits and 3 runs in 2 2/3 IP. He tossed a scoreless inning in the first Dutch upset over the Dominican national team. Against Puerto Rico, he relieved David Bergman with a 1-0 lead in the 6th, two on and two out, then fanned Iván Rodríguez. In the 7th, he gave up a double to Mike Aviles then retired Yadier Molina. Sulbaran plunked Alex Cora and gave up a single to Jesus Feliciano but escaped the jam by retiring Ramon Vazquez and Carlos Beltrán. Dennis Neuman relieved him in the 8th and combined with two other relievers to blow the lead. Sulbaran's struggles came against Team USA thanks to back-to-back triples by Brian Roberts and Jimmy Rollins as part of a 3-run rally.

Sulbaran throws a changeup, curveball and fastball (which has peaked at 94 mph).