Catcher José Lorenzana was a longtime member of the Puerto Rican national team, playing for them for over a decade. 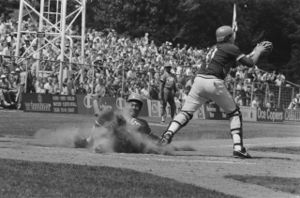 He helped Puerto Rico win the Bronze Medal in the 1989 Intercontinental Cup and was named the tournament's All-Star catcher, beating out notable players like Atsuya Furuta, Dan Wilson and Pedro Luis Rodríguez. He was only 4 for 20 with a walk and a double in the 1990 Baseball World Cup but no one dared try to steal against him in eight games. In the Bronze Medal game, he was 1 for 3 with a double and a run but Puerto Rico lost 7-4 to South Korea. He played in the 1990 Goodwill Games. He was with Puerto Rico when they won the Silver in both the 1990 Central American and Caribbean Games and the 1991 Pan American Games.

In the 1992 Olympics, the national team veteran was 1 for 6 as the backup to Efrain Nieves Sr. and allowed an uncharacteristic 6 steals in 6 tries. His lone hit was a single off Ron Villone. He played for Puerto Rico in the 1993 Central American and Caribbean Games, when they won Bronze. He also played in the 1994 Baseball World Cup at age 34, starting ahead of Nieves and having a fine performance both at the plate (.400/.455/.500) and behind it (allowing only 2 steals in 7 tries). The All-Star nod went to Italy's Luigi Carrozza but several other candidates also posted very good numbers (Alberto Hernández, Hideaki Okubo, Ki-moon Choi and Kab-yong Jin). He helped Puerto Rico win Bronze in the 1995 Pan American Games.