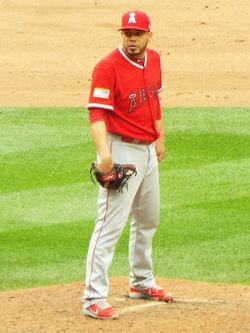 Pitcher José Álvarez won his major league debut with the Detroit Tigers on June 9, 2013, making a one-off start against the Cleveland Indians in place of Anibal Sanchez, sidelined by a sore shoulder. He pitched 6 innings, allowing a run on 3 hits and a walk, and striking out 7. He was given the win when Don Kelly broke a 1-1 tie with a three-run homer in the bottom of the 6th, after which he was replaced by Drew Smyly.

On March 21, 2014, he was traded to the Los Angeles Angels of Anaheim in return for infielder Andrew Romine. The Tigers badly needed infield help after learning that shortstop José Iglesias was likely out for the season. He played five full seasons for the Angels, from 2014 to 2018, making 270 appearances for the team, all of them in relief. On December 6, 2018, he was traded to the Philadelphia Phillies in return for Luis Garcia, a player with a very similar profile, albeit a right-hander. He made 67 appearances in 2019 to a 3.36 ERA.