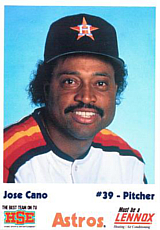 Father of Robinson Cano, José Canó pitched six games in the major leagues with the Houston Astros in 1989 In his final big league appearance, September 30, he finished his career in style with a complete game, 9-2 victory over the Cincinnati Reds. Away from MLB, José also pitched for years in Mexico as well as in Taiwan. He received more publicity than he ever did as a player throwing to his son in the Home Run Derby at Chase Field on July 11, 2011. Robinson won the crown with a tremendous performance, thanks in large part to José's excellent pitching. The close bond between father and son was evident for all to see.

Canó served as manager of the Dominican Republic Team that played a series of games as part of the Canadian-American Association's schedule in 2017. The team was assembled hastily and badly overmatched, especially its pitching staff, as many players that Canó wanted to bring along were unable to obtain appropriate visas on time.