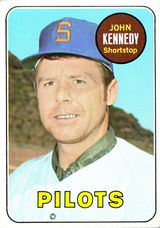 Infielder John Kennedy shares both a name and a birthday with President John F. Kennedy: both men were born on May 29th.

Breaking in with the Washington Senators in 1962, he got his only season as a full-time regular in 1964 under manager Gil Hodges, hitting .230 with 7 home runs on a team that hit .231 and lost 100 games. After the season, he was traded to the Los Angeles Dodgers, who would win the pennant each of the next two years. He was used frequently in the field by the 1965 and 1966 Los Angeles Dodgers and appeared in the World Series both years with them.

He was an original Seattle Pilots player in 1969. According to Jim Bouton's Ball Four he was ejected from a game on June 18th after the umpire called him out on strikes. He raged through the clubhouse after the ejection. When asked why he got so worked up, he said he was called out on strikes exactly when his greenie kicked in.

After his playing days ended, Kennedy was a minor league coach and manager and a scout. He was the manager of the independent North Shore Spirit from the club's inception in 2003 until 2006.