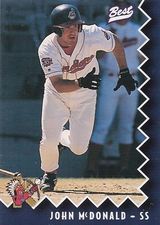 John McDonald is a middle infielder known for his defensive excellence who has forged a long career in the majors as a back-up with the Cleveland Indians and Toronto Blue Jays in spite of a weak bat.

McDonald played basketball and baseball in high school, and was All-State in baseball during his senior year in 1992. He also played baseball and basketball in college. He played two years of baseball at the University of Connecticut at Avery Point in 1993 and 1994. He was named the New England Junior College Player of the Year in 1994. He was also a second team Junior College All-American in baseball that year. He played the next two years at Providence College. He was named second team All-Big East Conference during both seasons (1995 and 1996). 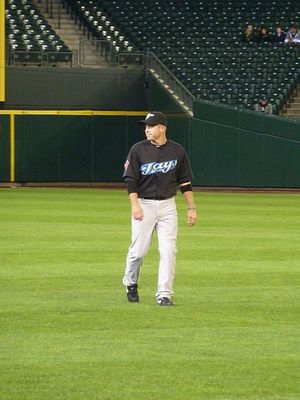 McDonald would flutter around the minors that year, spending 5 games with Mahoning Valley in the New York-Penn League and 1 game with Kinston in the Carolina League on rehabilitation assignments. He went up to the Indians for 9 games, hitting a .444. He was placed on the disabled list twice in 2000, April 27th to May 9th, and May 10th to June 22nd. Back to Buffalo he went in 2001, hitting .244 over 116 games. He went up to the Indians again for only 17 games that year, and was on the DL from May 10th to 17th. Having a luckier year in 2002, he appeared in 93 games in Cleveland, hitting a .250 with 1 HR.

2003 would have him playing for Lake County in the South Atlantic League for only one game, also appearing in one game for Mahoning Valley that year, both on rehabilitation assignments. He went back to the Indians for 83 games with a .215 in 214 AB before going on the DL from June 30th to July 17th, and again from August 23rd to October 3rd. For 2004, McDonald played exclusively for the Indians in 66 games, hitting .204. He was traded to the Toronto Blue Jays on December 2nd for a player to be named later. Cleveland got pitcher Tom Mastny in return, completing the deal on December 13th.

McDonald would move around the Bigs in 2005 after starting the year with the Blue Jays; he was sold to the Detroit Tigers on July 22nd, and was again sold to Toronto on November 10th. All told, he was in 68 games and hit .277 that year. After that, McDonald would get to wear the Blue Jays uniform exclusively for the next few years. In 2006, he was in 104 games for Toronto, with a .233 average. In what seems to be a stream of bad luck, he was on DL yet again from May 28th to June 12th. Injury-free in 2007, McDonald played SS and 2B for the Jays, going .251 in 123 games.

2008 saw him in Dunedin Florida State League for 3 games after yet another injury. He then went back to the big club, playing in 84 games with a .310 for the Blue Jays. Again, he was on the DL from May 7th to June 7th. The Blue Jays moved him around the field in 2009, playing SS, 3B, 2B and OF. He was only in 73 games that season with a .258 average. He filed for free agency on November 6th, and was re-signed by the Jays on November 25th. During the two previous years, he had played exceptional defense during stints when he had to fill in as a starter, and the contract was a reward for that, as well as recognition that he had become a fan favorite for his smart and scrappy play and down-to-earth attitude.

He was placed on Major League Baseball's bereavement list on June 10, 2010 to be with his father, who would pass away from cancer later the next week. Outfielder Dewayne Wise got the call-up to fill the vacant spot on the Jays' roster in his absence. McDonald hit a rare 2-run home run in his first at-bat for the Jays after his return from his father's funeral, on June 20, which was also Father's Day. However, the San Francisco Giants spoiled the Hollywood moment, winning the game 9-6. He hit .250 in 63 games for the Jays that year, with a career-high 6 homers. In 2011, he hit an improbable 11th-inning walk-off home run off Adam Russell of the Tampa Bay Rays on April 27th to give the Jays a 6-4 win at the Rogers Centre. He hit .250 in 65 games, filling in at various spots around the infield, before he was traded to the Arizona Diamondbacks on August 23rd, along with starting 2B Aaron Hill, in return for the D-Backs' starting 2B, Kelly Johnson. Arizona was clearly looking to improve its defensive play heading into the home stretch of the pennant race after having lost starting SS Stephen Drew to an ankle injury at the end of July. He played 19 games with Arizona, batting only .169, and went 0 for 2 in the NLDS against the Milwaukee Brewers. Because Drew's recovery was expected to be slow, the Diamondbacks re-signed McDonald for 2012 and were planning to share playing time at shortstop between Willie Bloomquist and him at the beginning of the year.

Most stats taken from the 2010 Who's Who in Baseball