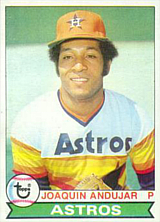 "He was the best pitcher I've ever caught, and I'm telling you, I played on a lot of great teams. Whitey was real unique in that he really went after guys who could pitch. Joaquín was one of those guys." - Darrell Porter, in Peter Golenbock's The Spirit of St. Louis

Pitcher Joaquín Andújar was a four-time All-Star and Gold Glove winner who led the National League in wins, shutouts, and innings pitched at different stages during a 13-year career.

Andújar was signed by the Cincinnati Reds in 1969 and traded to the Houston Astros in 1975. He made his big league debut in 1976, and in five and a half seasons with Houston, he made the All-Star team twice but posted a winning record just once. Andújar was traded to the St. Louis Cardinals for Tony Scott during the 1981 season and went 6-1 in 11 games. The next year, he was 15-10 for the team and starred in the postseason, winning both his World Series starts as the Cards became world champs, defeating the Milwaukee Brewers in 7 games. In 1984, Andujar led the National League with 20 wins and 4 shutouts. The next year, he won 21 games but struggled in the postseason, allowing 12 earned runs in 14 innings. In Game 7 of the World Series against the Kansas City Royals, he was ejected after twice exploding at umpire Don Denkinger. Denkinger had, of course, blown a call at first base in Game 6 that provided the spark for a Royals rally to take the game and, ultimately, the series in seven.

Following the 1985 season, Andújar was traded to the Oakland Athletics. After two seasons there, he was back with the Astros in 1988. In 1989, he played for the Gold Coast Suns of the Senior Professional Baseball Association and went 5-0 with a 1.31 ERA. He was signed by the Montreal Expos to a minor league contract but was released before the 1990 season began. When he retired, his 127 wins put him second all-time among Dominican pitchers after Juan Marichal; he has since been passed by a number of others.

Andújar's nickname, "One Tough Dominican" was self-selected, as he often liked to refer to himself in that way.[1] The most famous quote that is widely attributed to him is, "There is one word in America that says it all, and that word is, 'You never know.'[2] In 2012, he was inducted into the Caribbean Baseball Hall of Fame along with Neifi Perez. He had a 2-0, 1.82 record in the 1975 Caribbean Series, 1979 Caribbean Series and 1980 Caribbean Series. He died in the Dominican Republic in 2015 after a long battle with diabetes.