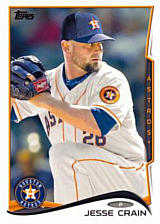 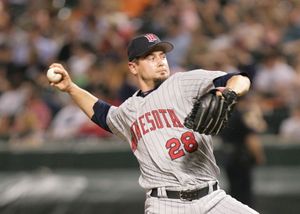 Jesse Crain pitching for the Twins

A reliever in ten big league seasons, Jesse Crain saved his best work for last, making the American League All-Star team in 2013 on the strength of a filthy good season with the Chicago White Sox. He is perhaps the only pitcher to have played his final game before getting the nod, succumbing to a right shoulder strain after pitching on June 29th, weeks prior to the All-Star Game, then never pitching again.

Born in Toronto, Ontario, Canada, Crain grew up in Colorado. After beginning college at San Jacinto Junior College, he transferred to the University of Houston and was later chosen by the Minnesota Twins in the second round of the 2002 amateur draft. He was signed by scout Marty Esposito and began his career that summer with the Elizabethton Twins, going 2-1 with a 0.57 ERA and 2 saves in 9 games before being promoted to the Quad Cities River Bandits in August. With the River Bandits, he went 1-1 with a 1.50 ERA and a save in 9 outings. Crain started 2003 with the Fort Myers Miracle and was promoted to the AA New Britain Rock Cats in early May. After going 1-1 with a 0.69 ERA and 9 saves in 22 games, he advanced to AAA in July with the Rochester Red Wings, for whom he saved 10 games. He began the following season back with the Red Wings, and, after saving 19 games, was promoted to the Twins in August.

Following the season, Crain became a free agent and signed a three-year deal with the Chicago White Sox. The Sox more than got their money's worth, even if they were not particularly competitive, as he was solid all three seasons. In 2011, he went 8-3, 2.62 with a career best 70 strikeouts in 67 games. He piggybacked off that with a 2-3, 2.44 and 60 strikeouts in 51 games in 2012. He was damn near unhittable early in the 2013 season, going 2-3 with an 0.74 ERA in 38 games until the end of June. From April 17th to June 22nd, he enjoyed a streak of 29 straight scoreless appearances. He was named to the All-Star team for the first time but unable to participate due to a right shoulder strain. With the Sox in last place, Jesse was traded to the contending Tampa Bay Rays for future considerations on July 29th. He never did come back. He became a free agent and, on December 31st, signed a deal with the Houston Astros, spending the entirety of 2014 on the 60-day injured list. An attempt to come back in the White Sox system in 2015 bore no fruit, done just as he was kicking his career into high gear.