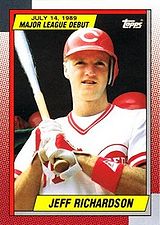 Jeff Richardson was called up to the big leagues in 1989 after Barry Larkin went down with an injury. He was the Cincinnati Reds' starting shortstop for most of the rest of the year. Traded to the Pittsburgh Pirates right before the start of the 1990 season, he spent the entire year in the minors. He was called up for a few games for the Pirates in 1991, but spent another full season in the minors in 1992. He was traded to the Boston Red Sox right before the start of the 1993 season and called up in May for a final 15-game stint in the big leagues. He was injured in a collision with Frank Thomas, herniating two discs in his back. After trying to battle through the pain, he finally called it quits in 1995.

Richardson began his coaching career soon after retiring as a player in May, 1995. The Pittsburgh Pirates assigned him to coach the Lynchburg Hillcats for the remainder of the season. Richardson was a manager in the Pirates farm system from 1996-1998, managing the Erie Sea Wolves in 1996, the Augusta GreenJackets in the first half of 1997 (until 6/18), and the Lynchburg Hillcats for the rest of 1997 and into 1998. Richardson left the Hillcats to become head coach at Louisiana Tech University. In 2001, he led the school to its first winning season in more than a decade. He resigned following the 2002 season to devote more time to his family and businesses in Grand Island, Nebraska. He currently owns three bars in Grand Island including Balz, a sports bar whose slogan is "Who Needs Hooterz When You Got Balz."