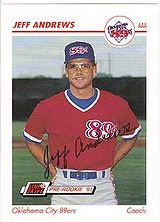 Pitcher Jeff Andrews was selected by the Chicago Cubs in the 25th round of the 1981 amateur draft and played two seasons in their system. He was 7-2 with a 2.08 ERA for the Geneva Cubs in 1981. In 39 innings, he allowed only 26 hits. He did allow 14 unearned runs, though, so his ERA was somewhat deceptive. Had he qualified in innings pitched, he would have led the New York-Penn League in ERA. With the 1982 Salinas Spurs, the reliever worked in 33 games, going 3-4 with 5 saves and a 3.56 ERA. This time he only allowed four unearned runs.

In 2008, he became the Pirates pitching coach. He replaced Jim Colborn, who had been widely criticized for tinkering with the mechanics of Zach Duke and Paul Maholm. While Maholm and Duke fared well back under Andrews' tutelage, the staff as a whole struggled. They had the 5th-highest ERA in franchise history and issued the most walks. As a result, Andrews was fired at the end of the campaign.